We take a break from your regularly scheduled baseball card posting to bring a team Phungo concert review. 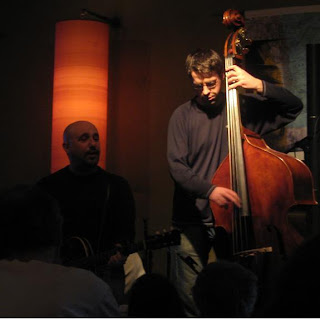 This past Saturday January 24th Jim Infantino and his band "Jim's Big Ego" back to the Philadelphia Suburbs to play a near capacity show at Ardmore's Milkboy Coffee.

JBE is an entertaining and sharply funny band based out of Boston. They have a unique style that I can only describe as having a geek-rock appeal that is somewhat similar to "They Might Be Giants".
Infantino led the three piece band (guitar, upright bass, drum/percussion) through an hour plus set of mostly new material from the latest JBE release "free*". Highlights included "sleepwalker", "i (don't know how to) party", and JBE favorite "She's Dead" as well as a recently penned song about troubled Illinois Senator Rod Blagojevich - Mostly I think Jim wrote the song only because he envies the senators hair. 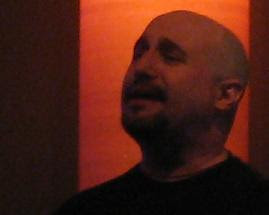 Jim Infantino @ Milkboy Coffee - Ardmore PA 200-01-24
I spoke to Jim briefly after the show and he said that he felt that JBE should be out touring more in the near future and that Milkboy was a good place for them to play in the Philadelphia area. He was also good enough to sign a copy of the new JBE CD for me. The band had Free* (real price $15) for sale on both CD and Vinyl as well as two of their prior CDs and T-shirts.

The Milkboy staff was courteous and efficient as usual. They dealt with the large crowd quite well.
And a note that may interest my baseball audience, Jim Infantino has sung the National Anthem at Fenway Park, and I presume is a Red Sox fan. There used to be Anthem photos on the JBE website but they appear to no longer be present.

While we are on the Subject of the Red Sox, if you have not voted in the Jim Rice HOF poll please do. If you want more background on Rice check out my posting from last week, and you will get a hint as to how I voted. 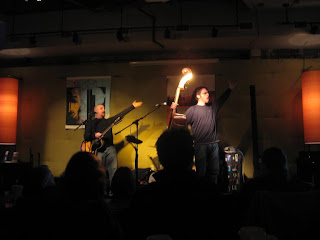 If you have seen Jim's Big Ego, I am sure you know during which song the above picture was taken.
Posted by deal at 9:51 PM