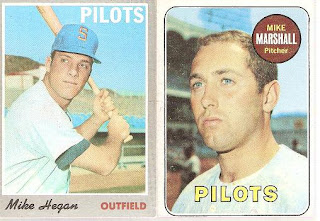 A few weeks back the Seattle Mariners marked the 40th anniversary of the Seattle Pilots sole major league season in the Pacific Northwest by hosting a reunion of the 1969 team. The 69 Seattle Pilots may have only played one season but Jim Bouton's chronicle of the team, "Ball Four", has made them part of Baseball Immortality. Bouton was on MLB network recently and I briefly mentioned the event a few weeks ago.

Oddly the Pilots while only having played one season are actually part of two Topps releases 1969 and 1970. According to Wikipedia the Pilots didn't move to Milwaukee until late in spring training of 1970, thus the 70 Topps Pilots cards.

It has been a few years since I have read "Ball Four" but as I remember Mike Marshall was a pretty prominent character. I think I remember Mike Hegan from the book, but I am not positive, I think he was the guy involved in a shouting match with a fan while boarding the team bus.

By September 8th of 69 Bouton had been traded from Seattle to the Houston Astros. On the 9/8 entry Bouton discusses the hammering of opposing pitcher Mike Corkins in his Major League debut, San Diego Padre Nate Colbert, and the ridiculous price of room service (3.06 for a strawberry sundae - for the wife , and 3 scoops of chocolate for Jim)