I don't care if it is from the late 80s junk wax era. An early Greg Maddux card is a keeper. 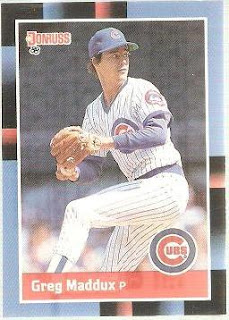 A few months back a picked up a buffet of mixed packs at a 6/$5. one of those packs was the 88 Donruss - which may have been the last pack I went for. The Maddux made the 15 card pack worth it, other semi-stars in there included Rick Sutcliffe, Garry Templeton, and Dave Stewart.

and of course if you have a Pull of the Month, one must have... 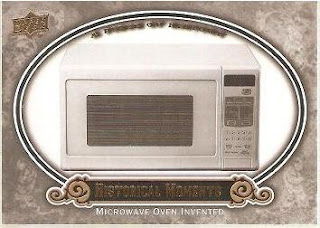 Are they serious. And this is my insert for the pack. A stinkin Microwave Oven...And I am pretty sure this is not the one that was invented either, this one looks like the one down the hall in Upper Deck's Coffee Room. Piece of History my butt more like Piece of Snot. 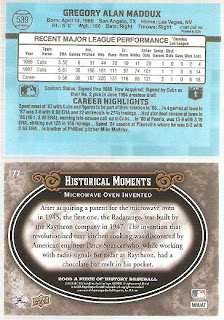 Click to enlarge these guys. Just wanted to point out Maddux's Rookie and Sophomore years. A collected 5.58 ERA and an 8-18 record. After that point, he was 138 games over .500 amassing s total of 355 wins. There are not many cards for which you can say after it was minted the guy won 347 games, this is one of them.

On the flip of the PoH Wave card we finally find out that Percy Spencer invented the Microwave. Still no picture of the guy but at least they mentioned him.

Past Pulls of the Month

Email ThisBlogThis!Share to TwitterShare to FacebookShare to Pinterest
Labels: Cubs, Greg Maddux, Junk of the Month, Percy Spencer, Pull of the Month

Yeah Ours probably looked pretty similar. no fancy keypad on those classics.