What Would You Do With This? - 1977 Hostess Twinkies Uncut Sheet 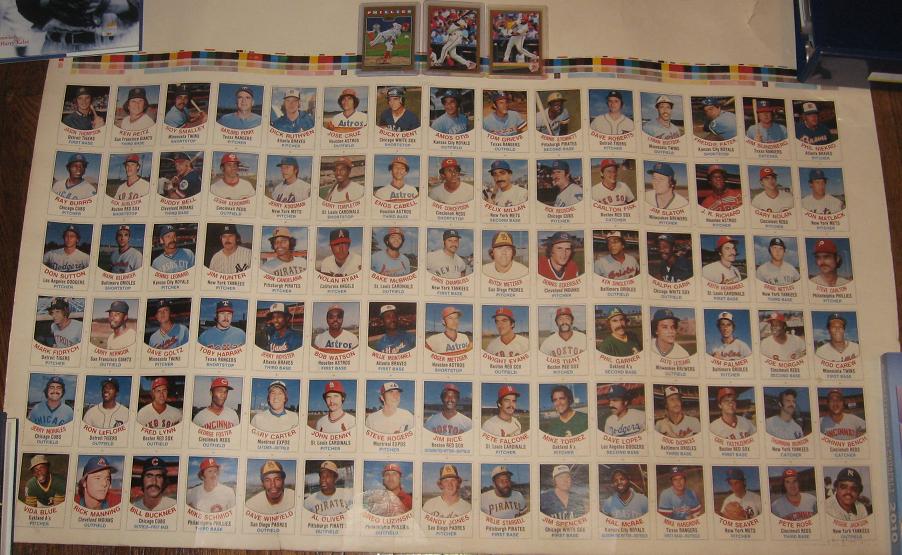 More and more of my friends have found out that I have been collecting baseball cards as a pretty serious hobby(or obsession) recently. As a result I have inherited some cards or other memorabilia from different folks.

A few weeks ago our friend Susan donated the above item to the Phungo Museum.

You may have seen some of these cards cut or on a 3 Card Panel. They were issued with Hostess Twinkies. This is a Full Sheet of 90 cards.

At the top of the Photo, I placed some Topps Gold Cards from the last few years for a size comparison. The Hostess Sheet cards would measure 2.5 x 3.5 if cut evenly. Each individual "card' has a smaller dotted line that could be used to cut a smaller card.

Also at the top of the sheet you can see the Color Marks that are probably used as part of the printing process to insure color processing quality.

There are some great names in the collection featuring several major stars and Hall of Famers from the 70s.

Here is a couple of the cards that sit next to Mike Schmidt. 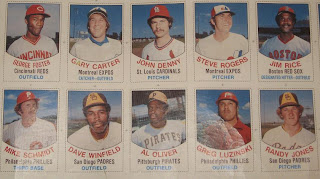 Yep those are Hall of Famers Gary Carter, Jim Rice, and Dave Winfield in addition to the Mike Schmidt card.

The Steve Carlton card is also in a pretty nice neighborhood. 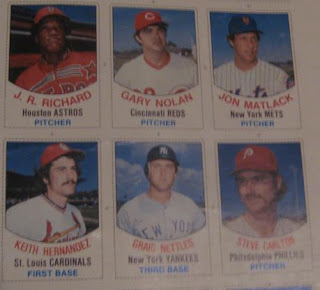 According to the Stardard Catalog of Baseball Cards the six cards above make up panels 38 and 39. Cards 112-115 (Richard's Row) and cards 116-118 (Hernandez/Nettles/Lefty)

The sheet is in good condition at best and I doubt that it would generate a lucrative offer if I were to sell it. I would guess $20, perhaps $40 to the right buyer.

However, there is one remarkable aspect to the sheet: 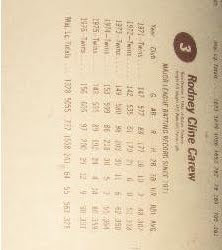 Pardon the display angle of the cards - for some reason some of my photos are rotating when I edit them and upload them to blogger.

At any rate for whatever reason there are two cards on the sheet that are swapped. The Rod Carew card above is Typically #9 in the 77 Hostess Set. while.... 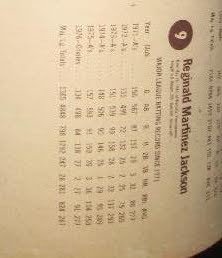 The Standard Catalog mentions this and notes that the #3 Carew and #9 Jackson cards are Unissued Proofs. Which I imagine explains why this is an entire sheet - it was a proof.

The fact that we are dealing with a "rare"/short printed Reggie Jackson item here, may influence the value of the card sheet, but I doubt it would significantly.

Unless somebody out there absolutely has to have the sheet, I believe I will look into framing the cards. I haven't measured it, but given the size and number of cards. I would estimate the size at roughly 26x42 inches - including about 4-5 inches of clear spaces at the top of the sheet.

I think it would make a great conversation piece in the center of my man cave/card collection room when I have one.

What would you do - Frame it, Sell it, Cut it and sell the Reggie?

Frame it ! I have enough stuff to start a museum and would really like to have room to display it all.Until I do, I keep saving and hoarding away.

I'd frame it if I had a place to hang it, or I'd sell it to somebody who did.

dont cut it ! frame it!
I have an 85 uncut with a Rocket RC im lookin to frame

Frame it! Way too cool to cut or sell.

Don't you dare cut that thing. Ever.

And if you want to sell it, I'll buy it. And then I'll frame it. And then I will stare at it lovingly for days forgetting to eat or sleep and wither away finally dying of sleep deprivation and starvation. And I will die HAPPY

If I owned it I would frame it and put it in my classroom.

I cut EVERYTHING, and I say FRAME IT!

get it signed and frame it.

I have this sheet, plus another sheet for the completed set. There are 14 cards that never got released. Some are just numbers that changed, but there is also cards that where never issued. The biggest star being Dave Parker.
Anyone know what this is worth?

What happened with it?