And the Winner is: 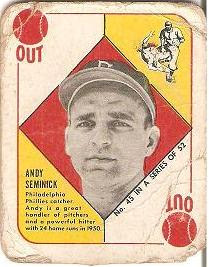 Chris of Vintage Sportscards guessed 1953 Topps and was the closest. Dan picked 1940 Play Ball, and I definitely looked at some of those - but they were all a little out of my price range. Night Owl went with 1956 Topps - I did pick up a bunch of those including a Hall of Famer.

This is my first Phillies 1951 Topps Card. Seminick is the only Phillies player in the Red back portion of the 1951 Set, which means that Team Phungo has completed the Red half of the 1951 Set!! WhooHoo.

This card was likely also my bargain of the day, as it went for 75 cents and then on top of that the dealer gave me a volume discount as I picked out several 53 and 54 Topps cards off the same table.

Later this week I will post some other highlights from the show. Until then check out the fine show review over at The Phillies Room.

PatSeacher from In Search of Pat the Bat
Rod from Padrographs
NicoLax from NR-MT
BA Benny from BABenny Baseball Card Buffet
zMan40 from Autograph Cards
Community Gum from Community Gum
Chris S From Vintage Sportscards
Posted by deal at 9:35 PM

Very nice - I must have missed that Seminick card! :)