There are a couple of subsets in 1964 Topps, the first of which numerically are the League Leaders cards. 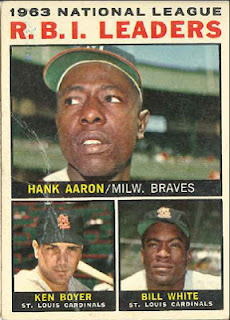 Last year Night Owl Cards put together bit of analysis of the league leaders card. To me this olympic podium design is the best. Decent size picture of the overall leader followed by two smaller pix of the runner up and third place finishers.

The LL cards in 1964 fit the overall design well. The two fonts on the card title are similar to the rookie cards and the player name plates carry over the feel of the base cards.

The above LL card was picked up at a card show last year for $2. It is in ok condition, not bad for the price of a 2013 retail pack you get a vintage card with Hank Aaron in the lead spot! - that is like stealing. Low recent ebay auction closed at $1.54 shipped. A graded PSA 9 card was the Hi end at $308.00.