May 1st marks the 40th anniversary of the day that Hank Aaron passed Babe Ruth on the All-Time RBI List. 1976 Topps commemorated the event by awarding card #1 in their 1976 to Aaron 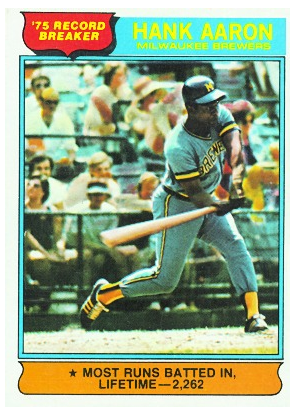 The record breaking RBI occurred during a Brewers 17-3 thrashing of the Detroit Tigers. Hank Aaron drove in Sixto Lezcano on a third inning single off of Verne Ruhle.

Of course history sometimes changes. Apparently since 1975 Babe Ruth, who died in 1948, has collected five RBIs.

SABR researcher Herm Krabbenhoft has gone through SIGNIFICANT research and established that Babe Ruth had 2214 RBI, or five more than was thought in 1975.

This means that Hank Aaron did not pass Ruth until a May 15th game versus the Texas Rangers. Aaron drove in Bill Sharp with a Sacrifice Fly. If you want a more thrilling story, later in the day Aaron hit a 3 Run homer, all four RBIs came off of Rangers starting pitcher Steve Hargan

It is interesting to note that despite the inflation of run scoring in the 1990s-20002 Hank Aaron remains the leader in career RBI. Not so much for Mickey Mantle, his 1509 RBI now places him 53rd overall.

Hank Aaron played one more season after the 1976T #1 card was produced and finished his career with 2297 RBI. 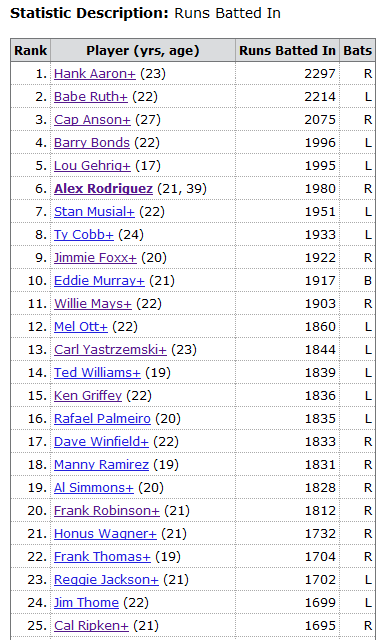 Mickey Mantle's 33 spot fall is not all due to PED era players, 19th century players such as Cap Anson are now on the list. Lou Gehrig and Ty Cobb both lost RBIs. The Most significant Phillis player on the list is Jim Thome.

I did have this card when I was a kid, but it is gone now. It is the only one of the six  cards that is not in the present Phungo Collection.