Saturday will mark the 20th Anniversary of the 1996 All-Star Game which was hosted by the Philadelphia Phillies.

In the contest which the NL took 6-0 the Philllies were only represented by one player Ricky Botallico, however there was a Hometown Hero involved in the Game.

Mike Piazza from nearby Phoenixville went 2 for 3 with a Homer and a pair of RBI. The performance earned the Dodgers Catcher Game MVP Honors. 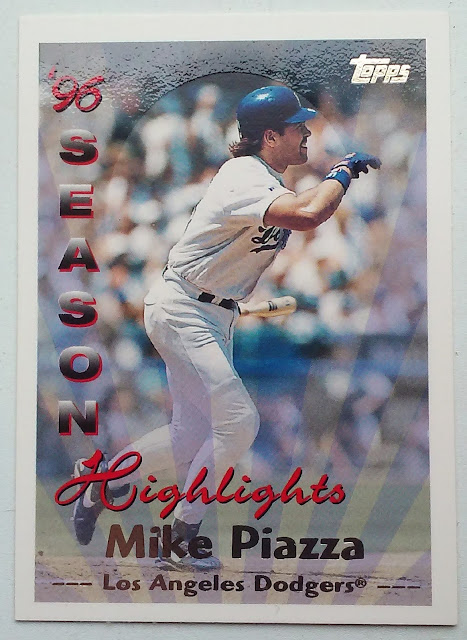 Topps noted Piazza's accomplishments with a card in the Highlights Subset of the 1997 Flagship Set.

I will not sloppy Topps this one as Piazza is wearing a Home jersey, which he would have donned for the All-Star game, but I am thinking this shot is from LA during a glorious day game at Chavez Ravine not at Philadelphia creaky old Veterans Stadium.

The front of the card isn't specific the event, however... 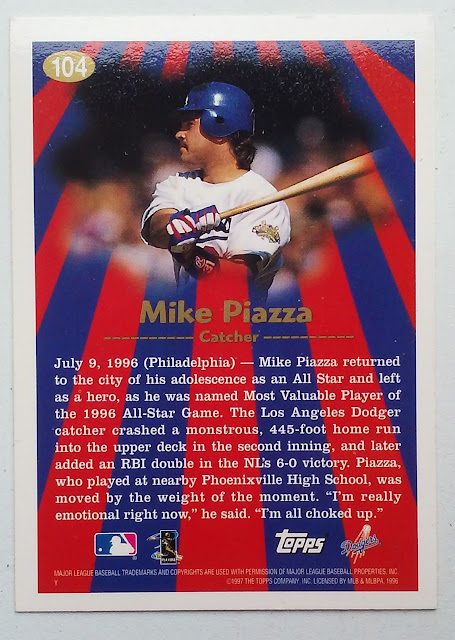 Nice  blurb on the back including dateline Philadelphia. The Home Run Piazza hit is detailed nicely, in the 70 or so games I saw at the Vet I can only recall a handful of balls that were hit as far as that one.

Finally the card also mentions Piazza Tenure at Phoenixville High - Makes for a nice add to the Phungo Locals collection.

Mike Piazza HoF Index
In a Couple of weeks Piazza will be inducted into the Hall of Fame. This posting will serves as our index of Piazza related postings.

As far as I know Topps did not issue All-Star cards in 1996 Update/Traded or 1997 Cards with ASG flairs. This is kind of a bummer as I would love to have more cards to represent that game. 1997 UD did add have a nice ASG logo on their 1997 Series 1 cards, I hope to take a look at those in a future posting or series.