Jim Thome: Welcome to the Wall!

The Philllies are adding a Jim Thome plaque to their Wall of Fame tonight. I won't be there for the induction but do plan on getting down to the park at some point this weekend. 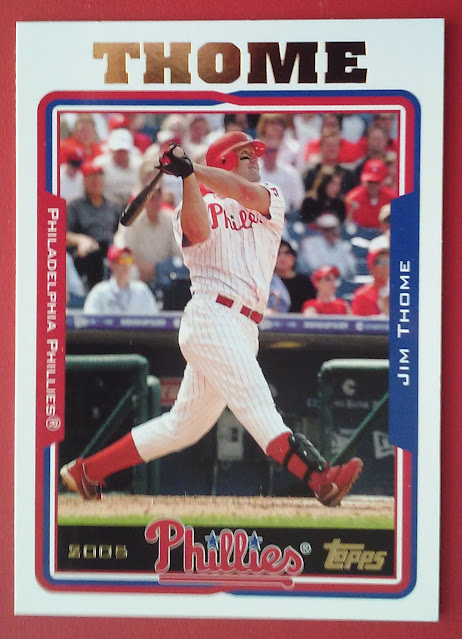 Remember a few years back when there was a buzz regarding Topps giving players card numbers that matched their uniform numbers. This Thome card is pre-buzz but it does fall on his #25. 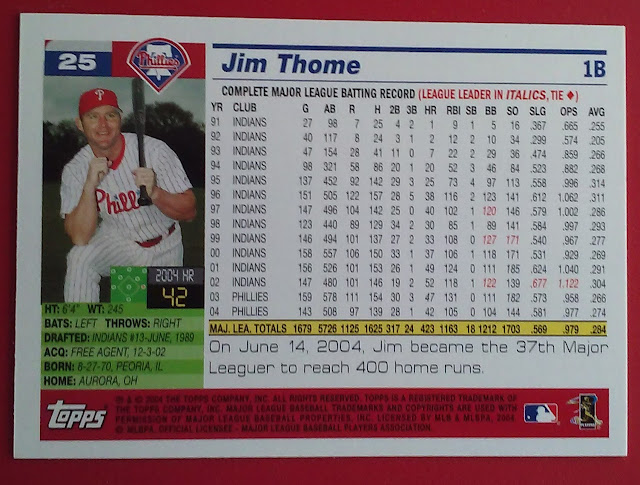 One of the reasons that I like this card is the fun fact, "On June 14, 2004, Jim Became the 37th Major Leaguer to reach 400 home runs." First off I respect the accomplishment and I am happy that the prodigious home run hitter reached the milestone while with the Phillies.

More selfishly I think it is cool that it was a game attended by Team Phungo.

Citizens Bank Ballpark was brand new at the time, there was always buzz at the stadium - even more so with a potential Thome Milestone. June 14 2004 was a rainy Monday night in which the Reds were in town to make up a game that had already been postponed once. None of this could damper the spirits of the fans there to see if Thome could hit #400. He didn't make us wait long - He homered in the first inning.

Except that there was the issue of a potential rainout - what would happen if the game didn't go the required 5 innings?

The clubs played through some rain and there were delays but the clubs eventually finished the contest (officially) with the Phillies winning 10-7 in a weather shortened 8 innings.

Someday I will dig through my ticket stubs and add one to this post.

Thome's 1st stint with the Phillies was 2 1/2 seasons. Is that wall-worthy? I say no.

Not related to Thome specifically, but in recent years the team has really lowered the bar on Wall qualifications, in their haste to generate fan interest & attendance. Who's next, Randy Wolf?