Another year has passed and once again I have pretty much failed in my goal of putting together my annual single subject series.

This year my target was the 1980 Phillies world championship team.

looks like I managed to add a grand total of four postings related to the 1980 Phillies – all in the middle of the field: Manny Trillo, Larry Bowa, Garry Maddox, and Dick Ruthven.

Today marks the 40th anniversary of the Phillies cinching their 1980 championship. 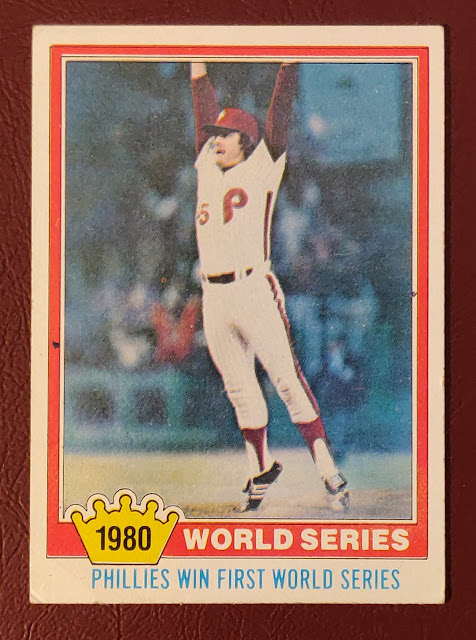 Topps honored the Phillies Victory on card #404 of their 1981 set. The featured player is Tug McGraw.

Today the demise of starting pitching is frequently discussed, However even 40 years ago McGraw registered the 3rd most outs of any Phillies pitcher for the series. His 7 1/3 innings ranking behind only Steve Carlton and Ruthven.

Even more importantly were the outs that Tug McGraw registered. Baseball-Ref has a new to me stat cWPA – Championship Win Probability Added. Basically the concept is how much each plate appearance affects the probability of winning a championship.

Among Phillies batters only Mike Schmidt (19.48) and..... Del Unser! (26.11) who had a couple of big pinch hits off Dan Quisenberry outpaced McGraw.

Perhaps I will dig deeper on this series in the future but for now we are likely on pause with the 1980 Phillies.

Nice Herb Score. You got a good haul for $4. دانلود آهنگ جدید