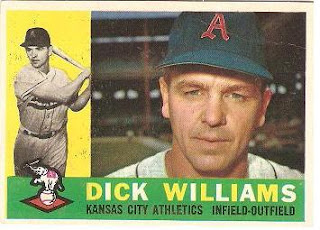 On Today May 7th we honor Hall of Fame Manager Dick Williams on his 80th birthday.

This is a card from Dick Williams' playing days be he is in the Hall of Fame because of his managerial success. Williams took 4 different franchise to the playoffs and led the 1972 and 73 Oakland A's to World Series titles. His teams accumulated 1571 career wins and were over 100 games above .500 during his tenure. Williams was inducted into the Hall of Fame by the Veterans committee in 2008.

Williams also had a fairly legitimat playing career putting together 13 season - He was mainly a utility guy who played 6 different positions. His best years were 1959 and 1960 with the KC A's where he hit 16 and 12 homers respectively with a combined 140 RBIs over the two seasons. According to Baseball-Reference among todays plays his carreer is similar to Gabe Kaplers.

There were no completed auctions of Dick Williams Topps Rookie Card - 1952 #396. The cheapest Buy It Now is listed at over a $100 for a pretty poor looking card. His 2nd year card - Topps 1953 #125 has recently sold for $2.99 including shipping. The only recently completed auction for a Dick Williams Auto was for his 1999 SI Greats of the Game card which went for $14.60 - which is actually ABOVE the book value listed in the 2006 Standard Catalog.
Posted by deal at 12:21 PM