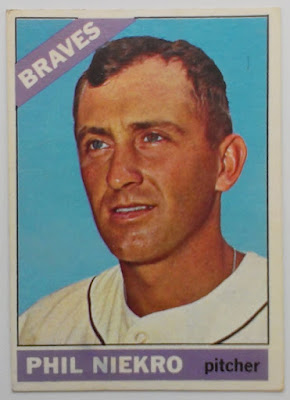 Phil Niekro won 318 games over a 24 year career. In the history of the game only 15 men have won more. Despite that heady qualification it took Niekro fve elections to get into Cooperstown. His other noteworthy numbers include 3342 strikeouts (11th all time) and 5404 Innings (4th).

Advanced metrics may place Niekro even higher, He ranks 10th all time in Pitching WAR. That puts his Career WAR ahead of first ballot Hall of Famers Steve Carlton, Nolan Ryan and Bob Gibson.

Some of this points to Phil Niekro make the Hall as a stat accumulator, but he had standout seasons as well.

During a rather impressive 3 year span form 1977-79 Niekro led the League in Starts, Complete Games (65 total for the 3 years), and innings - He also led the league in losses those 3 seasons as well as 1980.

Niekro probably deserved to win the Cy Young Award in in 1974, when he lost out to Mike Marshall (freaky 105 relief appearance year) and Andy Messersmith. It's debatable, Messersmith had a better record and more strikeouts, but it turns out Niekro had better WAR, ERA, and ERA+ Numbers.

Niekro was also a competent fielder that won 5 gold gloves and made 5 all-star teams.

The Niekro family has of course had three major leaguers including Phil's brother Joe and Joe's son Lance.  Lance Niekro played four seasons for the Giants whom the Braves are facing tonight.

The 1964 Topps #541 RC of Niekro is a high number and correspondingly rare. There was only one recent eBay auction that finished for the car and it was from a lower rater seller.  The low BIN for the card is $42.  For $110 you can pick up a PSA 7 NM card.

The last Topps card issued of Niekro during his playing career was 1987 #694 on which he appears in an Indians uniform.