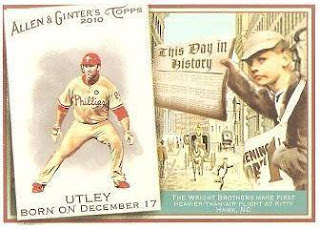 Time to open and review a Blaster of 2010 Allen & Ginter. First off I would like to state that this was a fun product to open. I sort of soured on Ginter in 2008. I was already building a variety of current sets at the time, and I felt that 08 Ginter was pretty bland. In general the A&G cards have a fairly plain appearance. For me the spice is in the oddball cards and the non-baseball insert sets - which in A&G do not feel out of place.

Opening a Blaster full of 2010 Allen & Ginter was just a box of good old fun - there is a History and or pop culture lesson in just about every pack. These packs actually even drew some interest from the future Mrs Phungo. Thats right I said the future Mrs Phungo. I don't really get into many personal messages here, but yes I am very happy to let everyone know that I have been given the promotion from Boyfriend to Fiance. Jo is on my mind a lot currently as she is traveling abroad for a long term work assignment and we will be apart for the next several months.

Phillies Cards - Strike Out
ugh - 8 packs, 4 base cards a pack - 30 teams in the league. You do the math - one should get at least a single base card from their favorite team. I haven't really analyzed the checklist but my guess is that the Phils likely have more than their share of 2010 Topps A&G base cards. Well none of those have found their way into the Phungo collection yet. I did manage a Phils insert - see above - which sort of makes up for not getting any of the base cards. 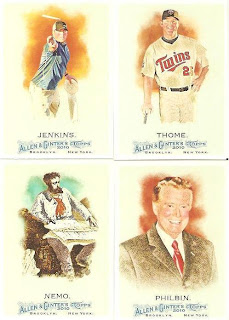 Base Cards - Line Drive Single
The rest of base cards were solid enough. I picked up a good mix of Favorite Players, Former Phils, Hated Villains and Oddball guests. I think I would have handed out a Double here had I received any Phils in the Box.

I love the Avery Jenkins card. Until my late 30s I was involved in the Philadelphia's areas Ultimate Frisbee league. My legs, knees, ankles and resistance to staying in good shape eventually conspired to force my retirement. About a year ago on the suggestion of card blogger Lake Effect Baseball Cards, I took up a little Disc Golf. It's a fun hobby, we have a very short course near our home and get out to it a few times a month when the weather if favourable. If anybody comes up with the relic or auto of this one, let me know - perhaps we can work a deal.

Regis Philbin and I are within a degree of separation. A co-worker of mine appeared on "Millionaire" about a decade ago. I think She won $125,000. I can' t remember what question she went out on, but I remember there was a Question regarding Magnum's baseball cap. 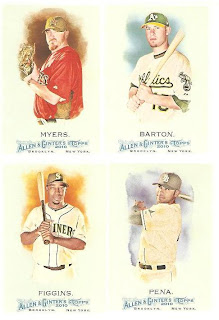 Short Prints - Ground Rule Double
A former Phil, plus Phungo favorite Chone Figgins. Is it me or are the Figgins and Pena cards recycled images? 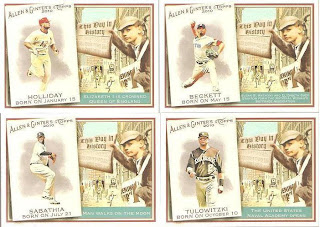 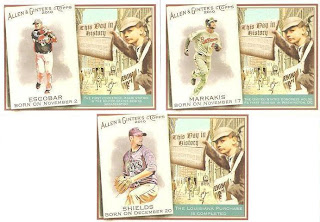 Yes, I like this set, Plus my one Phils card was the December 17th Chase Utley/Wright Brothers Aviation card above. Not sure at 1 per pack I will feel this way down the road, as I will likely open at least one more blaster of A&G this year. 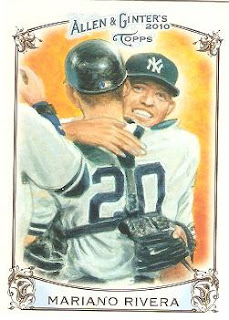 2010 Topps Allen & Ginter Baseball Sketches #AGHS4 Mariano Rivera
I suppose according to the Odds, This is the hardest card in the box to pull. The Card is nice enough, Not sure who the Phillies rep is in this set. Former Phils Pedro Feliz in the black border format, A Negro Leaguer. John Milton is a great Wordsmith - If I decide to build a mini insert set the Wordsmiths would likely be the one. 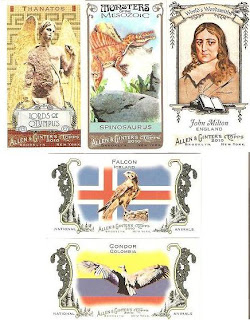 Not sure if the Dinosaurs work in a mini format - Oxymoron violation.

Should you decide you just want the Phillies base cards and more of the This Day in History cards, I've probably got all the Phils base for trade and I have 4 sets of the This Day in History that are all (close) to complete (none missing too many cards). I'm trying to complete all the mini sets, plus the regular back mini set - and the relic/auto set...so I've got plenty of things that I'm lookin' for!

I'll leave it up to you to figure out why I said that. :)