With the Mets coming into town for the weekend, in our Reading the Competition feature we take a look at a 2015T OD  card of Mets prospect Dilson Herrera. 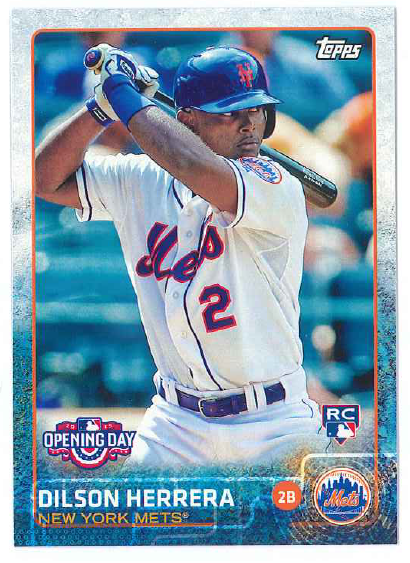 Baseball America ranked Dilson Herrera as the #46 MLB prospect going into the 2015 season.

The Colombian born Middle Infielder got a taste of the Majors in 2014 and I imagine he will at some point work his way into a platoon situation with Daniel Murphy. Herrera's offensive numbers throughout four minor league seasons have shown him to be a decent contact hitter with some pop. He has a .300 career BA in the Minors with double digit homers each of the last two seasons.

It should also be noted that Dilson is currently only 21 years of age and has played well versus older competition.

Herrera was acquired by the Mets as part of a trade that sent Marlon Byrd to the Pittsburgh Pirates. It will be interesting to see how he stacks up with Ben Lively who the Phillies got in return for Marlon Byrd this past off-season.

2015 Topps Opening Day
I tried to get a sharp scan of this card but it never was as good as I needed, so this may be hard to spot. Or you can check the Topps Website here and use the magnification function - which I have done beolw. What is the name on the Bat Barrell? . 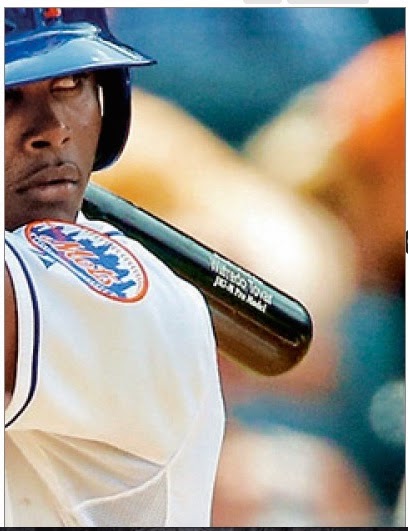 Is it me or does it say Wifredo Tovar?

The oddity is that the bat knob has the #2, which is Herrera's number - clearly seen on his uniform on the card above. So we have a Bat that has Herrera's number on the knob but appears to have Tovar's (who wore #70 with the Mets) name on the barrel.

A quick search revealed this,  Apparently Tovar wore #2 at Binghamton. I suppose he had a case of bats made and still has a few of them - and Dilson Herrera must like them.

Dilson Herrara's card number in flagship is #241, same image minus the OD Logo.