Noah Syndergaard, the Baseball America #11 MLB prospect for 2015, is scheduled to make his Major League debut tonight versus the Cubs in Chicago.

This is, however, not Syndergaard's first appearance in a Major League Ballpark. He likely has been involved in a couple of prep, Spring Training On-Deck, and All-Star Games.

One of the All-Star Games he was involved in was the 2013 Futures Game where he got to start in front of his future Home Crowd at Citifield. In the above photo he is pitching to current Red Sox shortstop Xander Bogaerts. 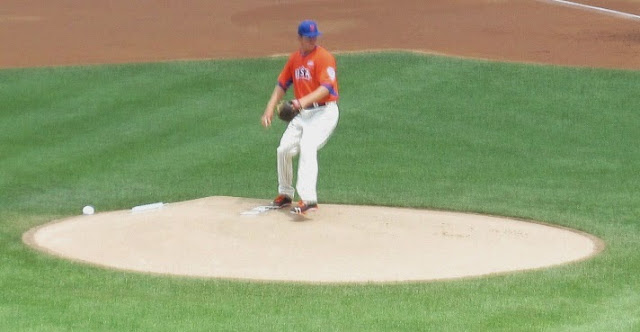 This is a tighter but blurry shot of Syndergaard on the mound. He gave up a single and recorded a strikeout during an inning of work.