It was Home Run Derby night at Citizen's Bank Park - The Brewers and Phils combined for 6 dingers. Oddly the games deciding play came on a sacrifice fly and botched throw.

The Phils took the see-saw game 5-4. The odd Sac Fly started on a 1 out fly ball to Ryan Braun by Placido Polanco. The Phils had Carlos Ruiz at third who may have screened rookie catcher Jonathan Lucroy on the throw which bounced away. On the errant throw Phils backup infielder Wilson Valdez came all the way around from 2nd to score the winning run. It was the most exciting play in a night that was filled with Homers and nice defensive efforts.

Prince Fielder, Alcides Escobar, and Core Hart (2) supplied the fireworks for the Brew-Crew. The Good Guys got Homers from Ryan Howard and Jayson Werth. Despite giving up four homers for first time in his career Roy Halladay got the W - makes up for a couple of tough losses he has taken earlier this season. The Phils bullpen pitched 2 innings of spotless relief, with Ryan Madson and J C Romero setting it up for Brad Lidge's 20th save. Kameron Loe took the loss for the Brewers. Local product Dave Bush got the start for the Brewers and pitched well and did not factor in the decision. Carlos Ruiz was 3-3 on the night - The Phils picked up a game on the Braves and are now 20 games over .500 for the first time in 2010. 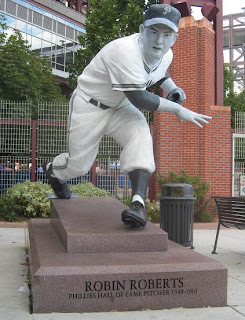 A Robin
This statue of Robin Roberts guards the first base gate at Citizen's Bank Ballpark. 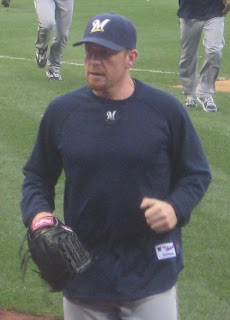 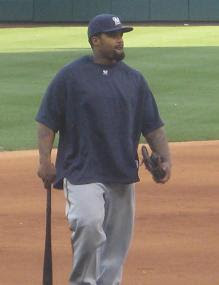 A Vegetarian
Prince coming in from BP. Might be Prince's first appearance in Phungo. 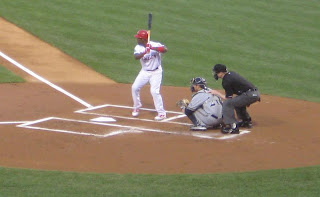 and A Jimmy
J-Roll has never been featured on a Phungo Card. He is always batting lead-off - I think I am not quite ready to take a picture when Jimmy is at the plate. Rollins was also spotted at the Red Bull Flugtag earlier on Saturday.

Other Observations
It was a really windy night - blowing left to right - I would have thought anything to Left would have gotten knocked down, but both Escobar's and Werth's Homers were drilled deep. The Bank may have held Fielder's sky-high homer on another night - same with Howard's.

The Brewer's were fairly well represented in the crowd. It is a holiday weekend and I am sure a few fans made the trip to Philadelphia for the series. Most common shirt I spied last night was Ryan Braun, with Prince Fielder not getting as much love as I would of thought.

Every Phillies home game is a sell-out, but there are levels of sell-outs. some are mobbed and some feel like Sell-outs in name only. Surprisingly last night was closer to the Mobbed variety. Lots of college students have returned to town and there was a Penn State promotion which added to the festive evening.

I only caught the tail end of the Brewer BP and they had the reserves swinging that bats. Rookie Lorenzo Cain looked pretty sharp lacing several hard hit liners and popping a long homer to left. Mat Gamel also hit the ball hard several times. Craig Counsell had the most consistent BP knocking several balls sharply up the middle.

Looking Ahead
The Labor Day Baseball Bonanza continues with the tricky Night Game followed by a Day game as team Phungo travels to Baltimore to see the Orioles host the Rays.
Posted by deal at 10:01 AM

Being a Phillies fan in the Houston Texas area means not being able to see too many Phillies games. Recently I found several web sites which offer televised games by something called Stream Torrent. It's not the best video but it is was better than nothing. So now I get to watch most Phillies games (including this one) on my laptop.