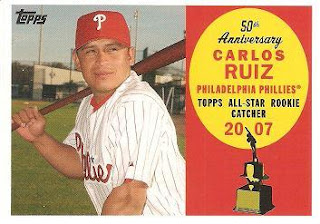 You don't have follow baseball long to know that Post Season heroics come from the little guys. The Playoffs are about pitchers largely because, it is a sport where the defense controls the ball. If the Rays decide they don't want Ryan Howard to beat them, they simply will not pitch to him. It is a good sound strategy - trouble is at some point you have to pitch to someone. Last night that someone was Carlos Ruiz - he had one big blow into the Left Field stands and his second big blow went all of 40 feet. They each plated a run and both hits gave the Phillies leads, the latter gave them the win.

Contributions came from across the team for the Phillies in game 3. Jamie Moyer shook off a couple of recent poor outings to give the 6+ innings of quality pitching. Ryan Howard checked in with his first post season homer right after Chase Ultey had homered. Jimmy Rollins added a couple of hits including a lead off single in the first. Rollins would go on from there to score the games first run. Despite giving up a run created largely by B J Upton stealing his way around the bases, the bullpen looked pretty solid again.

There are still reasons for concern. Ruiz's 9th inning dribbler was the Phillies first RBI with men in scoring position. Thats 26+ innings of baseball to come up with two hits with RISP. There has been some sloppiness - Jason Werth got picked off on the bases again - Ruiz made an ill-advised pick off attempt allowing Upton to score. Evan Longoria could be heating up - He hit a potential homer that may have been blown back into play for an out. The Rays have done an exceptional job of scoring runs without a lot of hits.

In Game 4 Joe Blanton squares off against Tampa Bay's Andy Sonnanstine. Blanton has been better than I expected in the playoffs, Sonnanstine has pitched well. I would be happy if the bullpens decide this game. Once again it looks like a night where the Phillies are going to need 5 or 6 runs. Hopefully Ryan Howard continues his surge and the middle of the order gets some hits.