Okay, I admit a week isn't very instant, but things have been crazy at Phungo HQ and I have had this idea floating around in my head for a while.

I wanted to create some sort of Instant Card for the Phungo Game Reports.  There has also been a bit of a  Polaroid revival happening, which I thought would be a great backdrop for i-cards, which I have dubbed PolarPhungo. 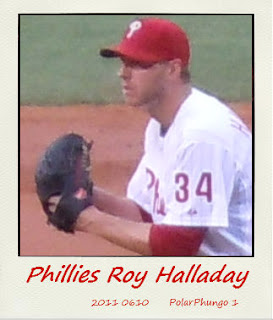 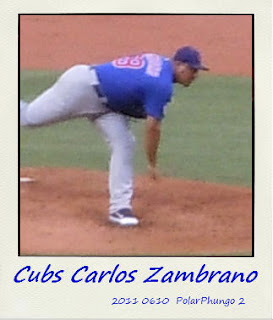 Both cards above were created using the FREE Photo Editor Pixlr, which I learned about a few months back from Dave over at the prolific custom card blog Goose Joak.  There are all kinds of great things going on in the custom card department and it is fun checking out the creativity of different collectors.

The first three editions of Phungo Cards were all produced using MS Paint, which has sufficed for making simple cards from the photos I have taken. I have definitely been thinking of moving on to Photoshop in order to get a more professional look.  Thanks to Pixlr I hope to come up with a more updated look for the 2012 Phungo set.

Both of the above photos were taken at the Cubs v Phils game a week ago Friday.  The Phils won the game 7-5 thanks to another good pitching outing from Roy Halladay and a Placido Polanco Grand Slam.  A couple of Phils relievers let the Cubs back into the game via some sloppy pitching with a big lead, but Michael Stutes and Antonio Bastardo were able to come in and nail down the win.

The Polaroiding of the photos covers up some sins in my out of focus photography.  It is a shame, We had some great seats at the game, but were seated beside a rather annoying "young" woman (actually in her 40s) which cut into our enjoyment of the game and limiting picture taking opportunities.
Posted by deal at 10:08 AM No comments:

I don't think Team Phungo will make it out but I would recomend any Jayson Stark book and Ray Didinger is in the football HoF for his NFL coverage.  Sal Pal's "Football as America" book has always interested me although I have not gotten around to picking it up yet.  Randy Miller wrote what is considered the definitive Harry Kalas bio.  Merrill Reese is the Eagles play by play guy.

Added:  Bernie Parent - Flyers Ambassador and Hockey Hall of Fame Member will also be part of the festivities.
Posted by deal at 3:30 PM No comments:

If you have been paying attention you may have noticed that there hasn't been much output from Phungo Headquarters recently.  There hasn't been a posting in three weeks, and that wasn't even baseball related.

You may have heard me refer to Team Phungo in this column from time to time.  Well, Team Phungo made it official this past week as We were joined in Marriage in the Outer Banks of North Carolina.  Fiancee Phungo has made me very happy and has graciously agreed to become Mrs Phungo.


It was a great day and week made possible by lots of work by our friends and families. 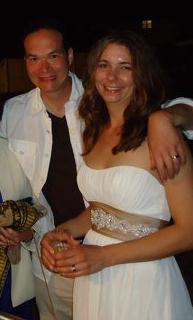