We are switching gears here, trying to see if posting sketches will get be more motivated to publish. We will see. 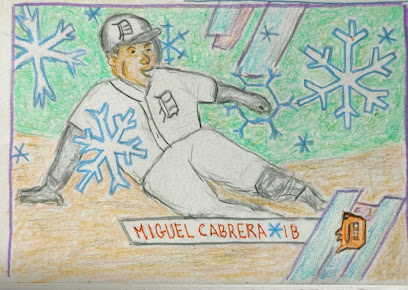 2021T Miguel Cabrera Snow Squall Variation
A few weeks ago Miquel Cabrera hit a Home Run on opening day, but it was snowing so much he could not tell if the ball had left the park. Miggy elected to slide into 2nd base on the play. We have captured that moment and put it on the canvas of 2021 Topps.
3 Strikes
This is my comments on the sketch - I try to come up with 3 things going thru my head during the development of the work:
- This is a contemporary event so I went with a 2021 Topps Canvas, I flipped the design on the x-axis because the slash placement interfered with image I wanted to created.
- Giant snow flakes: I used symbolic flakes over a bunch of little dashes that would have looked like rain.
- Big Font: I enlarged the name plate, lots of folks have noted that the 2021T player names are unreadable. I agree and well I cannot write that snowfall. The snowflake motif carries through to the name plate acting as the divider between Miggy's name and position.
ToppsNow
Topps issues an instant card for the Homer. 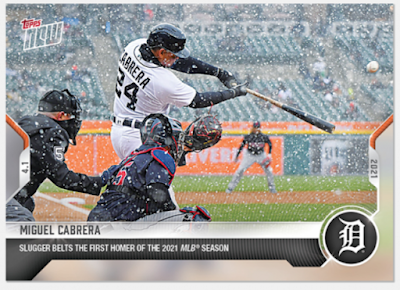 2021 Topps Now #1 Miguel Cabrera
Turns out Cabrera got card #1 in this years Topps Now set! Nice enough, this angle is always a good one and the image clearly shows the snow shower. Still I prefer mine, mostly because it's mine, but I also like capturing the slide as it was unique moment that doesn't typically happen on a Home Run.
Flagship 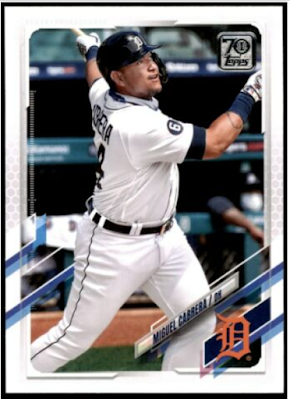 2021 Topps #291 Miguel Cabrera
Looks like Miggy's base card was taken on a much nicer day. On this one you get 2 HoF for the price of one as we can see the Al Kaline #6 memorial patch on Cabrera's right shoulder. The card lists Cabrera's position as DH, which is accurate - it is the only position he played in 2020. Oddly it took him one game to get back in the field playing First Base, and that is reflected in my card above.
Sources and Link
Miguel Cabrera Index
Cardboard Connection
ebay
Posted by deal at 6:35 PM No comments: