The 2017 edition of the Connie Mack Chapter SABR Day featured a full slate of fun and interesting presentations. Guests included Phillies Alum Howie Bedell and Author Charles Kupfer. Additional presentations were given by several chapter members who covered a variety of topics ranging from the 19th century manufacture of the original “Base Ball” to present day Cuba excursions to see games. 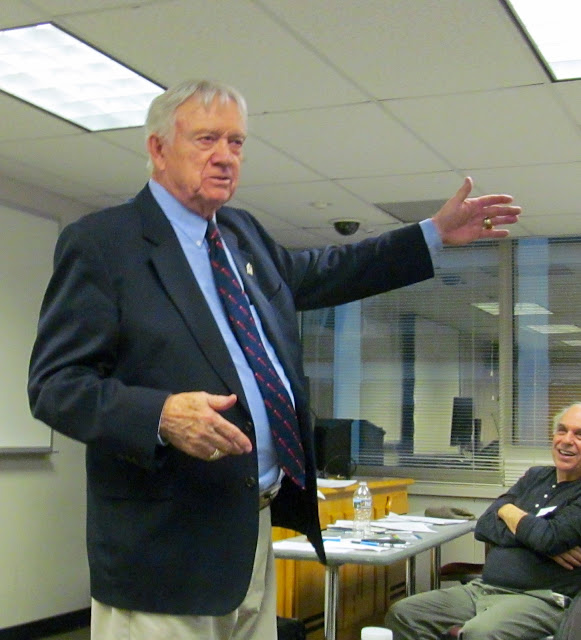 Howie Bedell
The highlight of the day was a personal appearance by former Major Leaguer Howie Bedell. The 81 year old Pottstown native spoke for over two hours regarding his upbringing and career both on and off the field. As a player Bedell spent only spent part of the 1968 season with the Phillies as a player but spent a decade in the organization fulfilling various coaching and player development roles.

Bedell confirmed something that I think many Phillies fans suspect. The Phillies do too much hiring and decision making from within. He cited nepotism as a problem within all organizations but felt as though there was a particular lack of leadership within the Phillies. He cited several examples of individuals that did not have enough commitment to make painful decisions, even if they were the right decisions. A theme throughout Bedell’s career appears to having to be the axe-man when it came to firing people. He was also careful to mention in several cases the ensuing changes worked out better for the person involved. They would get into better careers in other facets of baseball where they were better suited. Jim Bunning was relieved as his job as a minor league manager, but this led to him becoming an agent. This experience may have helped the Future Hall of Famer in getting involved in politics and eventually becoming a senator. Similar stories were mentioned that involved folks such as Dallas Green and Granny Hamner.

The Phillies won the 1980 World Series while Bedell was in the organization, it would the first of three World Championships with three different clubs.  He also won a ring with the Royals as a coach in 1985 and with the 1990 Reds as a member of their front office.

Bedell's time in Kansas City included the development of the slide step for pitchers. The Royals needed a way to neutralize the Cardinals fleet footed running game. The Slide Step was the solution - and it must have worked. The Cardinals only stole 2 bases in the 7 games series (while getting caught 3 times). Compare that with the 314 Thefts the Cards racked up during the regular season. Of course one needs to mention that the Cardinals also lost Rookie Vince Coleman (and his 110 steals) for that series due to injury.

Charles Kupfer on the Orioles 1979-1983
Harrisburg based Professor and author Charles Kupfer discussed his upcoming book “Something Magic: the Baltimore Orioles, 1979-1983” which he was gracious enough to amend to 1982 for purposes of entertaining a room full of Phillies fans. One of the interesting points he brought up was that the Oriole Way is documented in the book “Modern Baseball Strategy” by Former player and manager Paul Richards. Kupfer’s book is due out in May and will be available via Amazon.

Mark Kanter on Cuba
Mr Kanter discussed the SABR Group Travel experience to Cuba that he had this past fall. As could be expected there was a lot of interesting info that went beyond baseball. Among the slides Mark displayed were several of decrepit stadiums that are 60+ years old. Games are played during the day and have sparse attendance, despite a meager three-cent admission. Several SABR members took baseball equipment to Cuba to be given to the teams – the Items were much appreciated. For more details see Mark's article in the Jewish Voice.

Seamus Kearney
Connie Mack Co-Chair Seamus Kearney led a discussion on the career of John Kruk who is returning to Philadelphia this year as a broadcaster. Kruk always brings warm memories to Phillies sports fan and it was very enjoyable hearing al the stories told by and about Kruk over the years.

The Chapters other Chairperson, Dick Rosen, was also scheduled to speak but unfortunately due to time constraints his presentation on Goose Goslin was postpone for a future meeting.

Steven King
Yes SABR has it’s own Steven King who is also a writer. King often covers early 20th century baseball, and this weekend his presentation was titled “Andy Coakley: Man of Mystery”. King related several anecdotes about Coakley using various aliases to get involved in both baseball and non-baseball activities. None of this deception appears to have been malicious, and some of the stories may be puew legend based off of Coakleys previous deceptions. Regardless Coakley is in various local Hall of Fames including Columbia University where he coached for 30+ years which included the tenure of Lou Gehrig.

Ed Morton
Connie Mack regular Ed Morton put together a detailed powerpoint that discussed the birth of the "Base Ball" covering the late 19th and early 20th centuries. Much of the information concerned the relationship between AJ Reach and Spalding as well as another baseball manufacturer Victor.

Phil Williams
SABR Bioproject author Phil Williams detailed a terrible October 1913 evening in Brainerd Minnesota. That night Philadelphia Athletics Pitcher Joe Bush was fresh off a World Series triumph with the club.  All that good fortune turned in an instant as Bush while at home in Brainerd accidentally ran over a pedestrian. Bush was acquitted of any wrong doing and went on to have a very successful baseball career which included winning two additional World Titles, one each with the Red Sox and Yankees.

Matt Albertson
Matt gave a status update on the attempt to get a historical marker placed at the Jefferson Street Ball Park site. The major hurdle remaining is funding. A facebook page related to the project can be found here. If you would like to make a contribution to the project the crowdsourcing site is here.

Extra Innings
In additions to the presentations a raffle was held and lunch was served. Despite a tight schedule there was some time for socializing and catching up on the off-season. I didn’t make an exact count but I estimate 30 members attended 2017 Connie Mack SABR Day.

There is much more detail I could go into but that would require much more time. I could do a weeks worth of postings on Howie Bedell alone.

The Connie Mack chapter of SABR has their next Hot Stove meeting scheduled for February 11th. It will likely be smaller in scope then SABR Day but still should be fun.

This is our index to postings related to Scott Rolen 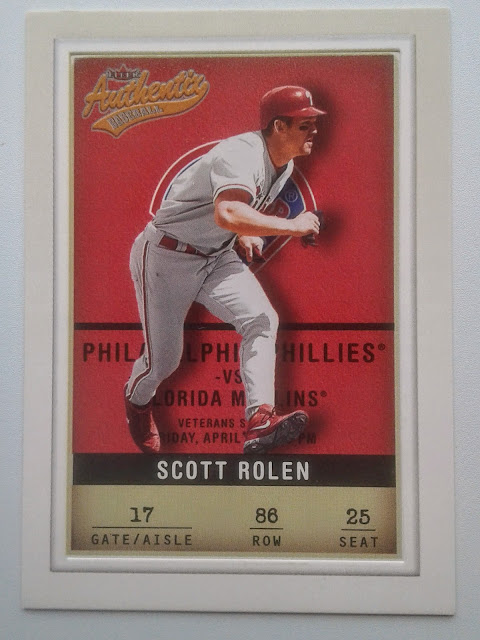 This is an Index to player profiles we may do on the new 2018 HoF Candidates.

My Goal is to cover the Five Phillies related players and selected others. Most likely of the others will be Damon, Vizquel, and Kerry Wood.


Sources and Links
SB Nation
Posted by deal at 5:50 PM No comments:

This is an Index to Roy Halladay related cards and postings.

This is an index to our postings related to Topps inaugural All-Star Rookie Cup team. The subset ran in 1960 to honor the Rookies of 1959. 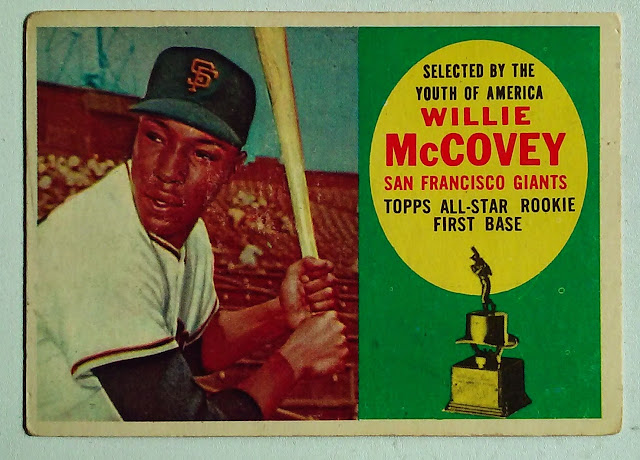 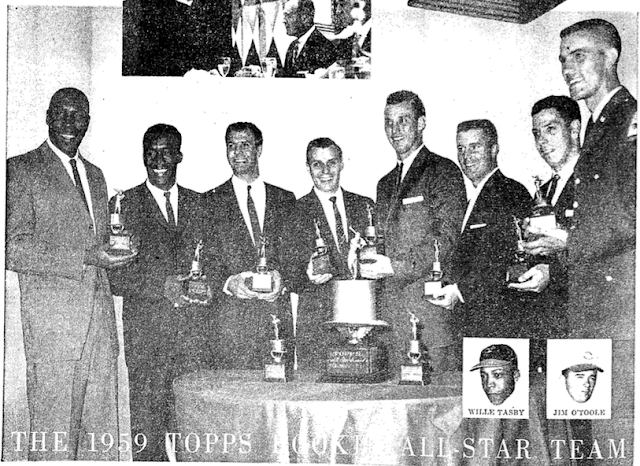 This is an Index to our postings related to Jamie Moyer 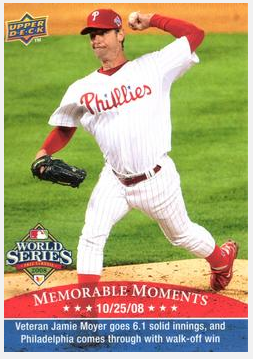 This is an Index of First Last and Only Cards

First Catcher with Throwing Hand Tucked
Posted by deal at 2:35 PM No comments: