25 years ago today (July 30 1995) Five baseball legends were inducted into the Hall of Fame. Among them were Richie Ashburn, Leon Day, Vic Willis and 19th century Executive William Hulbert.

The fifth inductee is the one we will discuss tonight. The only one to have played his entire career with the Philadelphia Phillies. 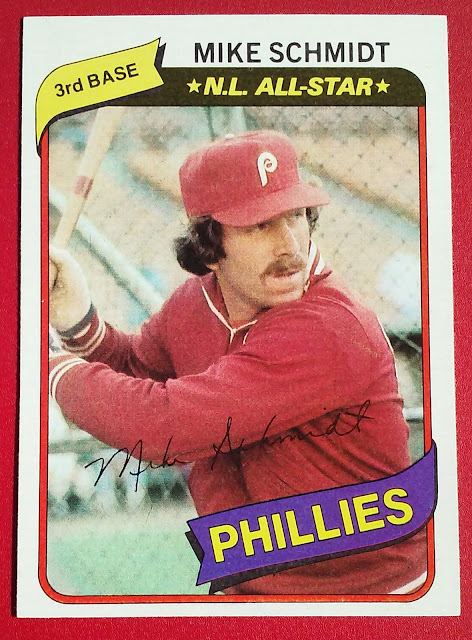 This is the first Mike Schmidt card tagged with an All-Star flair, honoring his first ever start for the NL squad in the mid-summer classic.

If your curious as to how well Mike fared in that game all you need to do is flip over the card. 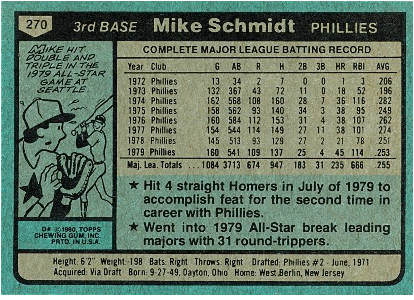 The Triple was in the first inning off of another Haller Nolan Ryan.  The hit plated Steve Garvey for the NLs first run in a 7-6 victory.

Schmidt made 12 All-Star teams and was named a starter 7 times.

1980 World Champions
It is obvious I am not going to dedicate as much ink to the 1980 Phillies as I would like, but I am still trying to highlight as many players as possible.  For more of these postings see the link below.

Don't worry I am not really returning to blogging, I just wanted to make sure that Cole Hamels 2015 No-Hitter versus the Chicago Cubs didn't not go unnoticed. 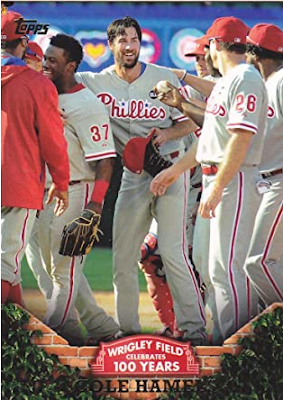 How cool is it to be featured in an insert set that is dedicated to another team.

Cole Hamels 5-0 no-hit victory versus the Cubs was a bittersweet moment.  On the one hand you have the excitement of the monumental accomplishment of one of the franchises most important players, however on the other hand it would be Hamels last appearance in a Phillies uniform.

A week later Hamels was traded to the Texas Rangers along with reliever Jake Diekman. The return was a bunch of ballplayers that have had varied degrees of major league time. The big chip so far has been Jorge Alfaro who the Phillies flipped for JT Realmuto.

Since leaving Philadelphia Hamels has pitched well and made the postseason with both the Rangers (2015-16) and oddly enough the Cubs in 2018.

5 Years Ago
For our original posting on the No-Hitter click here.