Team Phungo closed our 2012 MLB campaign where we started it, At Camden Yards. For the sixth consecutive year I was able to procure a playoff ticket.  Somewhat sadly that ticket was not for a Philles Postseason game.  Regardless time moves on and it has been exciting to watch the Baltimore Orioles usher in a new playoff era.

On Monday night the Orioles defeated their AL East Division Rivals 3-2 in a rather dramatic game.  There weren't many offensive fireworks as both teams had to scratch out all five of their combined runs.

There were a couple of notable performances Wei-Yin Chen and Andy Pettitte both pitched well, Chris Davis had a pair of RBIs for the O's.  Ichiro basically stole a run for the the Yankees with some creative baserunning in the first inning.

Always cool to be at any Big Flag game.  Both Baltimore and For McHenry take great pride in their place in American History and their connection to the Star Spangled Banner. 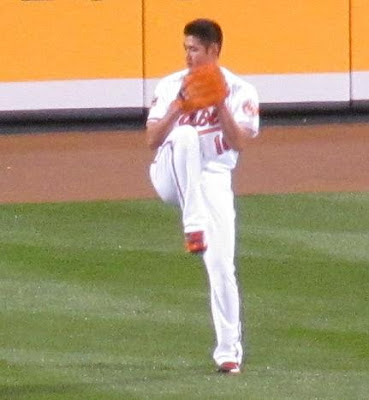 After getting into some jams early Chen was able to settle down and gave the O's 6 1/3 innings.  This photo of Wei-Yin was taken during warm ups.

Hard to imagine after a few up and down years Nate McClouth is batting leadoff for a 90+ Win team in the ALDS. 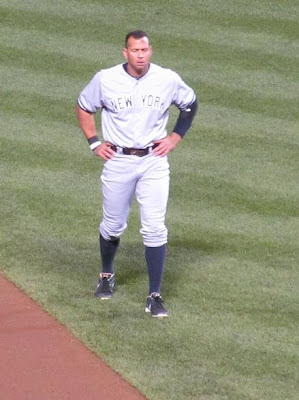 I heard last night that Alex Rodriguez set the  blob postseason record.  Blob is the term that Night Owl Cards has used for the last out of the Season, a Series, or Game.  A-Rod has now been the final out of 4 Playoff games

I really haven't heard what Pettitte is going to be up to after the 2012 season.  But he turned 40 this summer and has already retired once.  If the O's end up defeating the Yankees, Monday night may have been Pettittes final MLB appearance.
Posted by deal at 10:40 AM No comments:

Cardboard Connection recenlty posted the faux-relic series of Hall of Fame plaque cards featured in 2012 Topps U&H.  These I think essentially replaced the All-Star Patch cards from years past.  The sole Phillies player on the checker is Mike Schmidt. 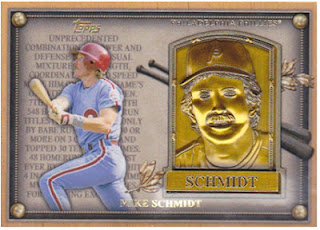 I spot checked a few of the cards and the headshot/plaque portion of the cards all have a freaky alien/anime appearance on these preview images.

While Schmidt is the only true Phils player a card was issued for, there is also a Cubs card issued of Ryne Sandberg who spent a September callup with the Phils prior to starting the Chicago portion of his HoF career.  Semi-related Sandberg once again got the call from the Phils today as he was promoted to be the third base coach w/ the big club.