I finally got to see a 2019 game that the Phillies actually won. And Topps was good enough to create a ToppsNow card for that game. 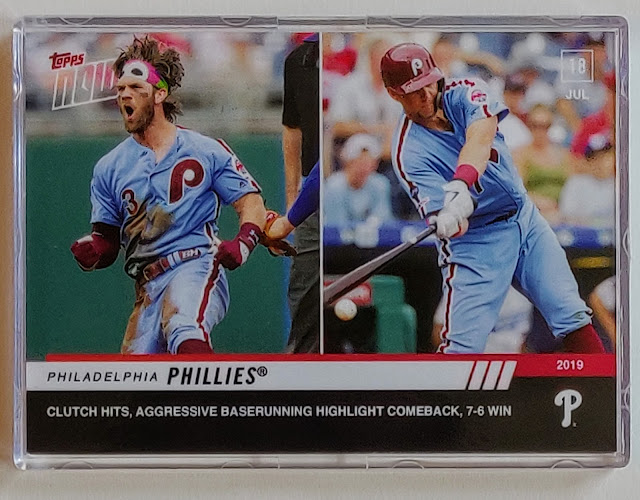 There were several key performers in the Phillies 7-6 victory over the Dodgers which featured FIVE lead changes (1-0, 1-2, 3-2, 3-4, 7-5). Topps chose to cover the days card with the Phillies big names Bryce Harper and Rhys Hoskins. However the hero could have also been 2017 First round pick (8th overall) Adam Haseley who tallied his first Major League Home Run.

Solid picture choices on both players. On the left we have a nice shot of Bryce Harper's emotional slide into second which I clearly remember from where I was standing. The latter photo features Rhys at the plate, anytime you can get the ball just prior to impact that's a win.

2019 ToppsNow
I would prefer that Topps go with a single image here but this was pretty much a team win and lets face it ToppsNow may not feature many Phillies this year. Otherwise this is an ok design, I would like to see the date more prominently displayed since NOW is a feature of the card. This is a two player card, but as far as I can tell the player position is not on single player cards.

There were six ToppsNow cards issued for July 18 2019. The Phillies had the largest print run for the day (464) even eclipsing the reigning AL MVP Mookie Betts and Hall of Famer Ted Williams. 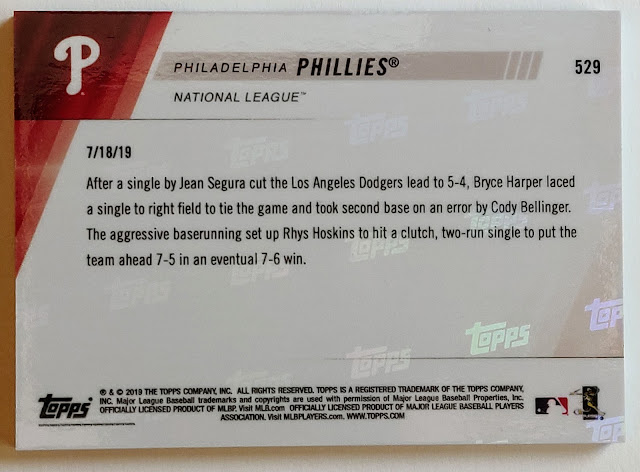 The Text on the back of the card gives a concise two sentend summary of the Phillies 7th inning comeback. Not to self: use the word "cut" when I want to discuss a team making a comeback. 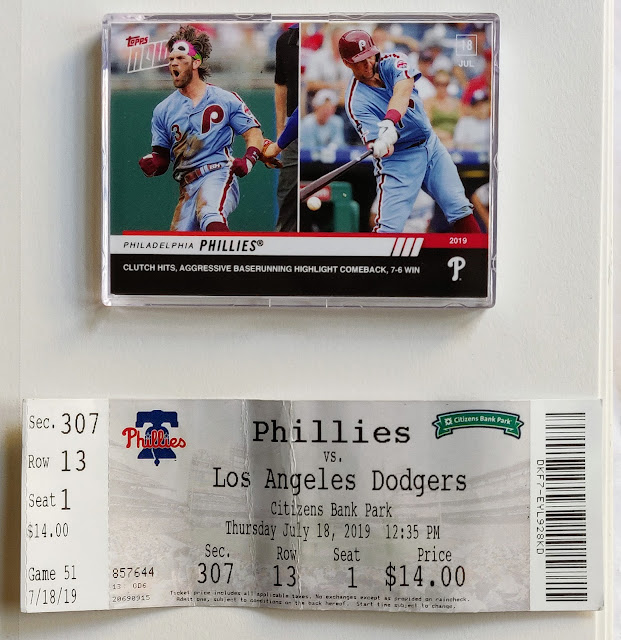 And since this card is from a game that Team Phungo attended it will be going into the Phungo Games binder. Always excited to share a combined trading card/ticket photo on the blog.

Not entirely true, but there is a lot of truth there.

Prior to college I think I only finished maybe...  three books, "1984", "Wired" the Biography of Jim Belushi, and "Ball Four". All those novels we were supposed to read in High School (Hester Prynne, Silas Marner, Macbeth, Huck Finn, etc Who Knows What Else)  - I read exactly none of them.

But "Ball Four" it spoke to me. 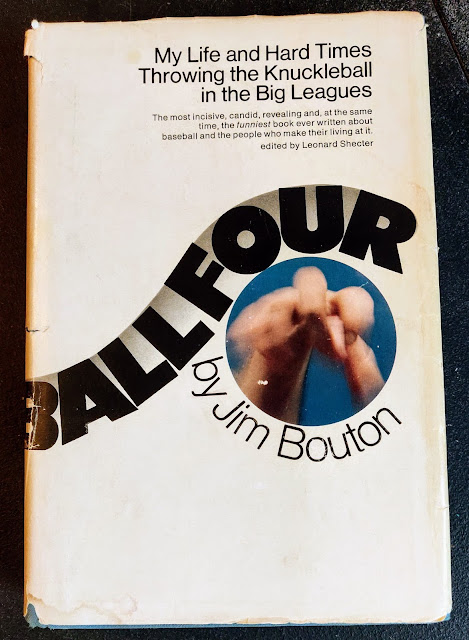 I have read the book three times once as a teenager. Again in my 20s or 30s, and most recently in my late 40s in preparation to see Bouton at the NYC SABR convention.

The SABR panel was incredible. That weekend it was publicly announced that Jim Bouton had a brain disease related to dementia. Regardless with the help of his wife Paula Kurman he was up to the task of discussing his life and Ball Four in a panel dedicated to Bouton and the book. A fan of the book and the man could asked for nothing more. Bouton was funny, touching, and informative. He was "Ball Four" personified.

He was also good enough to pose for pictures while signing books and other memorabilia. 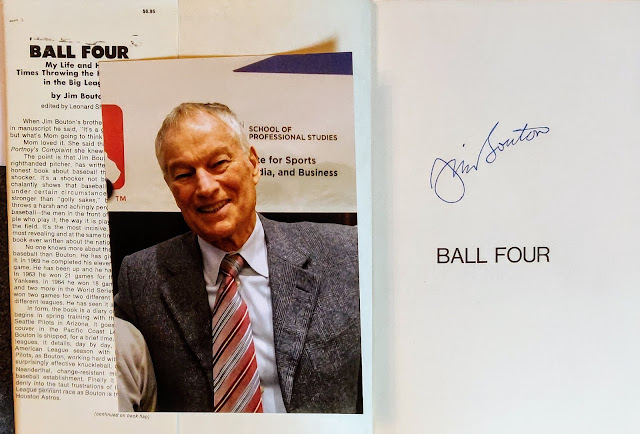 The Photo on the left page is one that I took at the event. The book is a 2nd edition 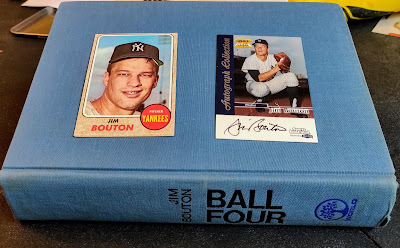 That's it for now. Over the coming weeks I would like to mine the Phungo Museum for some other Bouton related content. Today, I would just like to recognize that he will always be a favorite author and I am glad I was introduced to his unique point of view early in my life and have been able to enjoy it to this day. 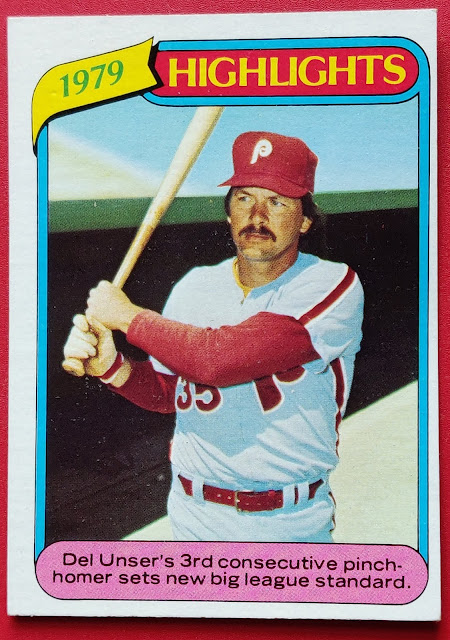 That pinch hitter was the Phillies Del Unser who tied a mark first established a year prior by the Dodgers Lee Lacy.

Unser's streak commenced on June 30th. In the 9th inning of game versus the Cardinals at Busch stadium the Phillies were down 4-2 with 2 out in the 9th inning. Phillies Center Fielder Garry Maddox was on base when Unser was sent to the plate to bat for Manny Trillo. Unser homered off of reliever George Frazier to tie the game which the Phillies won 6-4 in extras.

The 2nd Home Run came in a 3-2 loss to the Mets. Unser hit a solo home run in the 7th inning while batting for Larry Bowa in what was basically a convoluted double change. The victim was starting pitcher Craig Swan.

Del Unser finished his Home Run trifecta facing Padres future Hall of Famer Rollie Fingers. The Phillies went into the 9th inning down 5-1, four batters later the Phillies had pulled to 5-3 on a 2 Run single by Bob Boone.

A hit and an out later Del Unser found himself once again pinch hitting for Larry Bowa. This time out he hit a Walk Off Home Run to give the Phillies a 6-5 victory.

The streak ended 2 days later when Unser was Intentionally Walked by Fingers. The first time Unser was retired following the streak was July 23, Also by Rollie (strikeout).

1980 Topps Hilights
Hilights opens the 1980 set occupying the first six cards. The subset includes three Hall of Famers across two cards: Lou Brock & Carl Yastrzemski share card #1, While Willie McCovey resides at #2. In addition to Del Unser the Phillies are also represented in the subber by Pete Rose at #4. 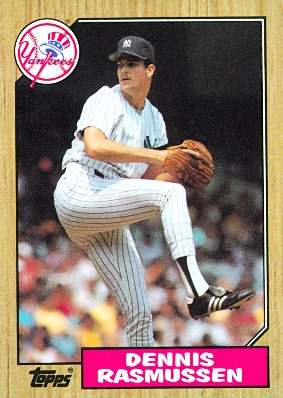 What the heck is Dennis Rasmussen doing in the middle of a Del Unser column??, well lets turn over this card and see. 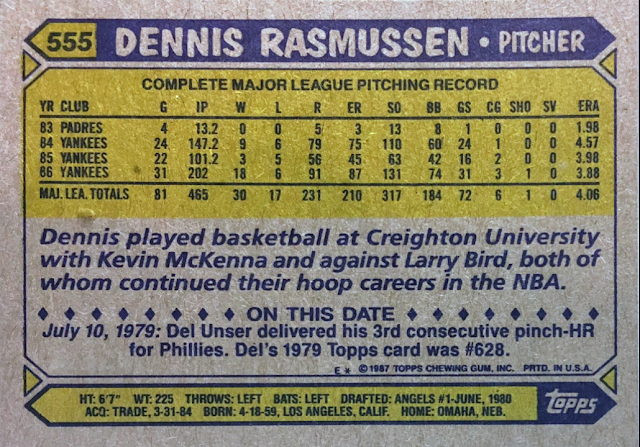 Ok we are going to bypass that this card discusses Hall of Famer Larry Bird and move down to the On This Date section. Check it out we have today's hero Del Unser! and it mentions his 1979 Pinch Hit Home Run heroics too! 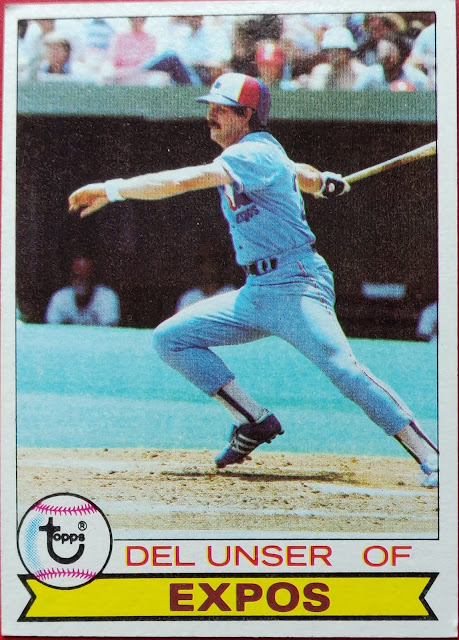 Unfortunately Unser is repping a different team, however it always feels good to post and Expos card. Lets flip this one over and see if we have anymore fun items. 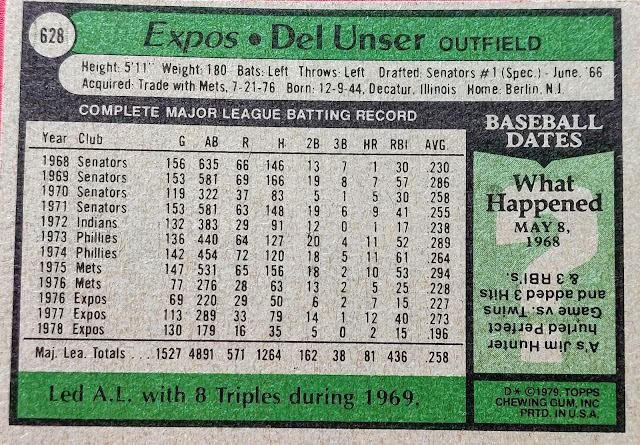 Well Check it out, we have another This day in History. This time it goes back to May 8 1968. On that date Hall of Famer Catfish Hunter tossed a Perfect game for the Oakland A's as they defeated the Minnesota Twins 4-0.

And just because I am chaining together cards today, I am going to add one final card. 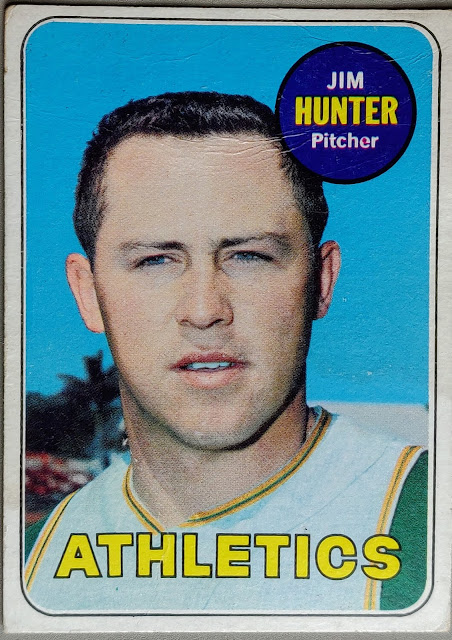 The first card issued of Catfish following his Perfect Game was in 1969 Topps. This is back when Topps was putting -Toons on the back of cards, surely the Catfish comic would be dedicated to his big Game... 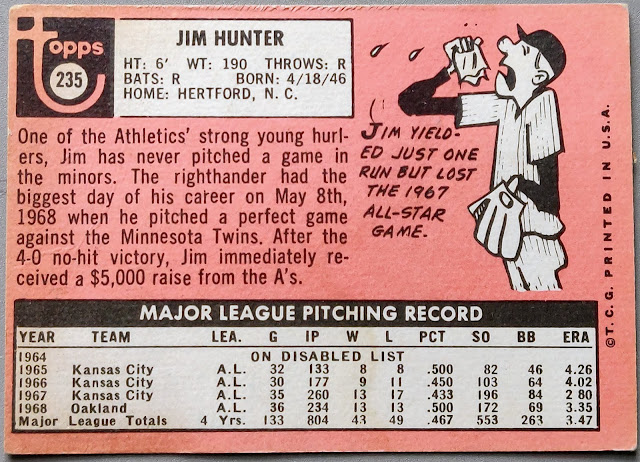 The game mentioned in the cartoon was a 15 inning affair won by the National League 2-1. In Hunter's defense he pitched FIVE innings that day, the difference was a Home Run by Tony Perez.

1980 Phillies
Next Year will mark the 40th anniversary of the Phillies first World Championship, I hope to feature that team throughout 2020. Since I am not writing as many columns these days I am getting an early start on the feature and will open my Anniversary series a full six months in advance.

This is an Index to our postings related to the 1973 Topps Rookie All-Star Team. The award is for the 1972 season with the cards issued in the 1973 season.