Last week we found out that a Pitcher won the NL MVP Award. Clayton Kershaw was the NL Leader in WAR and no position player stood out enough to sway the majority of voters to pick them over Kershaw.

A little bit lost in the voting was that the player who ranked 2nd in NL WAR among ALL players garnered ZERO MVP votes. Each of the 30 voters selected 10 player on their ballots and not one of them selected Cole Hamels 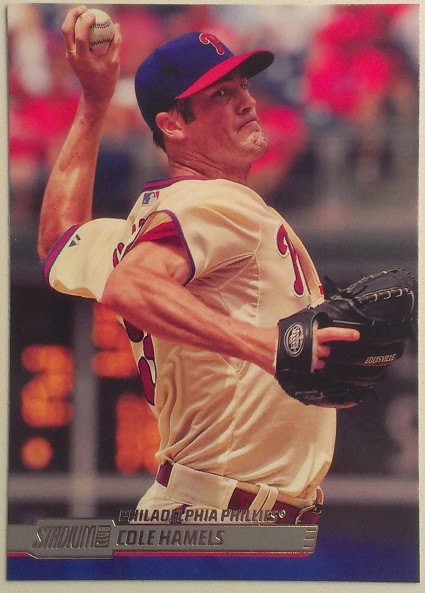 After seeing Brisbee's tweet, I Did some quick research and found that over the past 22 seasons the #1 and #2 NL WAR finishers have always received at least 1 MVP vote.

Here are the NL first and 2nd Place WAR finishers with the MVP pct of the 2nd place finishers.

There it is - Over the last 22 years we have 44 players that have fininished 1 or 2 in NL WAR. Every one of them got an MVP vote except Cole Hamels.

As expected pitchers finishing 1 or 2 are pretty likely to get dismissed. Nine times the WAR leader has been a pitcher Only Kershaw has gone home with the MVP award.

In 1993 Jose Rijo's finished clear back at #21 despite a 10.2 WAR. He was also not among the 3 NL players to receive first place Cy Young votes. Although his pitching WAR was only 9.3, but it was still best among NL pitchers.

Cole Hamels 2015
At this point in the Hot Stove - Late November - we are not sure that Cole Hamels will be in a Phillies uniform in 2015. Regardless we will project him and adjust as necessary in the future.

Ok it is a bit high, and it is based on nothing but a number of an unrelated pitcher from over 20 years ago, but it is my projection. If you don't like it, make your own calculation.

2014 Topps Stadium Club
There are a lot of great pix in 2014 Stadium club, I am not sure that the shot of Cole Hamels is one of them, however I am sure of one thing.... 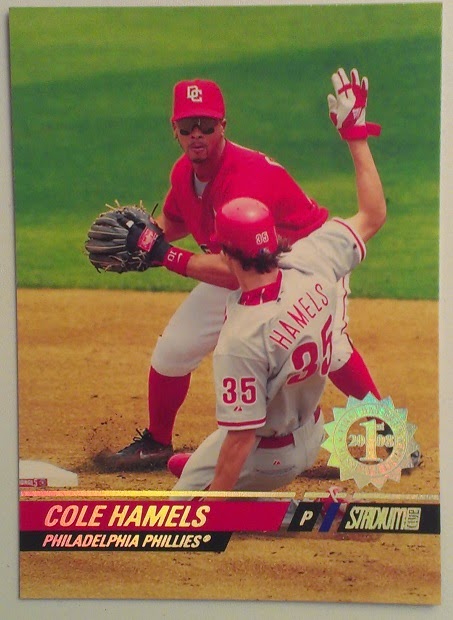 The 2014 TSC card is a lot better than the 2008 card featured here. There is nothing wrong with this shot except that Hamels is the 2nd most important person on a 2 person card.