This is an Index to postings about the 2008 Topps All-Star Rookie Cup Team that was honored in the 2009 Set. 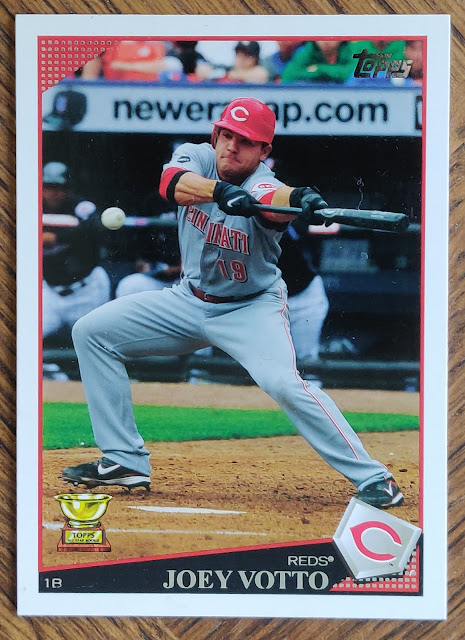 On September 27th Mike Schmidt will celebrate his 70th birthday. To mark the occasion we are examining a card that was issued back when Schmidt was 27 just on the cusp of hitting his prime. 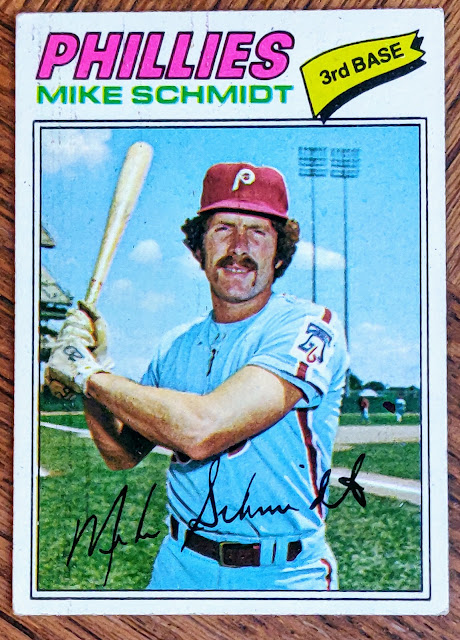 In 1976 the Phillies wore a Bicentennial/All-Star Game patch on their left shoulders. The 1977T card which displays the patch most prominently is Mike Schmidt's.

That is probably my favorite aspect of the card. I have two other photo observations:

1) I believe this is Shea Stadium which is the setting for several Phillies cards in the era.

2) Schmidt appears to be swinging a Rawlings bat. Adirondack/Rawlings bats from the middle 70s carried a ring on the bat handle in the team color - seen in red here.

However, during a Louisville Slugger tour I took a few years ago I found out something interesting: 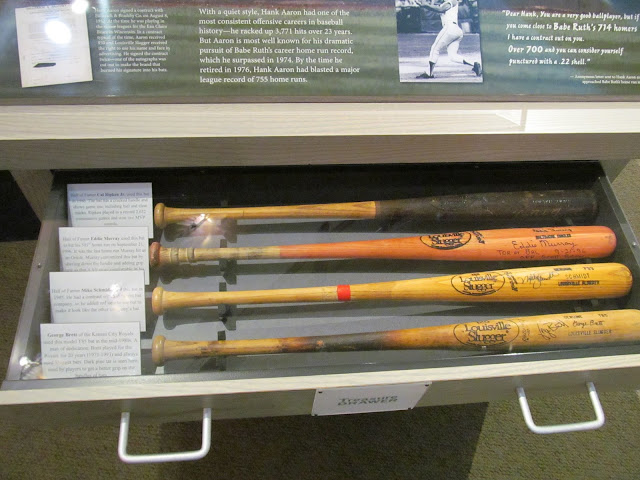 Above we have four Louisvlle Slugger Bats. Schmidt's lumber is the 3rd one from the top, notice the Red ring. Schmidt had an exclusive contract with Rawlings, however at times he felt the need to change bats. To hide the switch, Schmidt disguised the Louisville Slugger bat by creating his own red ring using tape. More detail on this can be found at the PSA Card site. 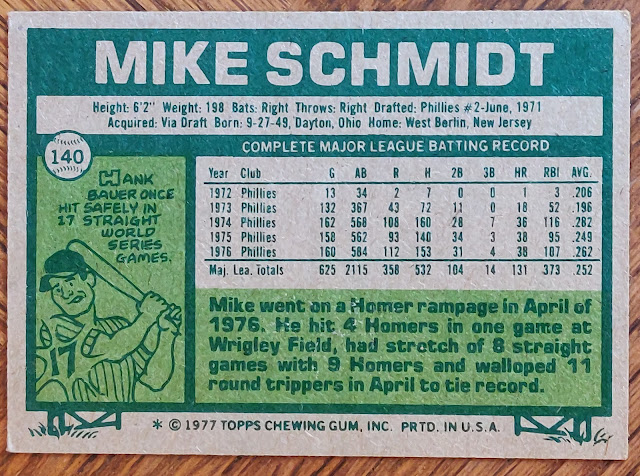 This is the first card issued following Schmidt's Four Home Run game on April 17 1976 and the text leads of with that fun fact. The blurb closes mentioning that Schmidt had 11 Homers in April which is a record - not sure if this is for any month or specific to April. Regardless both records have been eclipsed since 1976. Sammy Sosa holds the MLB Record for HR in a month with 20 (June 1998), While the April Record of 14 is shared by Albert Pujols (2006) and A-Rod (2007).

Talkin Toons
Always good to see a cartoon on the back of the card. The subject of today's comic is Yankees Slugger Hank Bauer and his17 game Wolrd Series hitting streak( 1956 OCT 3 - 1958 OCT 4).  At the time this card was released Bauer had held the record for 18 years. Here we are almost 42 years later and he still holds the record. the 2018 World Series marked the 60th Anniversary of the record.

Bauer's 17 game hitting streak is also the record for consecutive postseason games as well. He shares the record with Derek Jeter (1998-1999) and Manny Ramirez (2003-2004).  The Astros George Springer has an active streak of 14 games

Bauer Toons
A couple of Hank Bauer own cards have comics that feature the record including 1960 and 1961.  My favorite is a manager card from 1969. 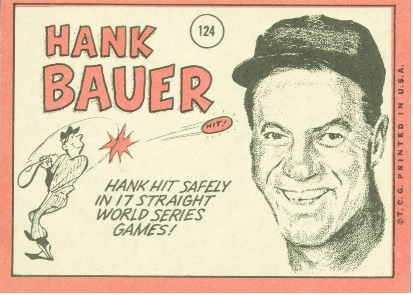 Rather than featuring a lengthy text bio the Manager cards from 1969 featured a full size cartoon that include a nice profile sketch.

Artsy
Speaking of sketches and bringing this back to our original subject, I created my own version of the 1977T Schmidt card. 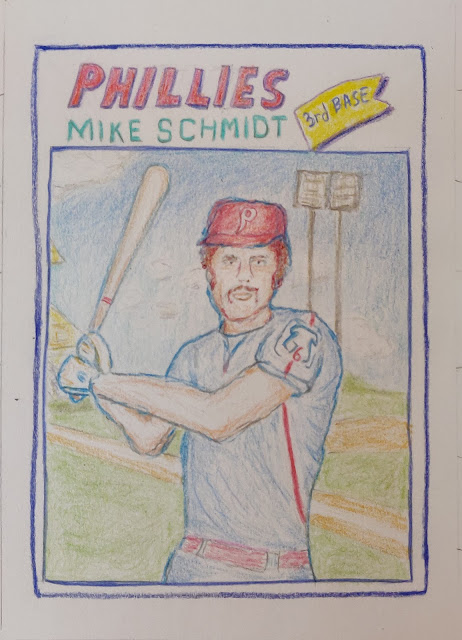 Drawing 1997 Topps doesn't present any unusual challenges. The Team names are italicized which is a minor hassle. I like the drop shadow on the pennant.

I elected to leave the team logo and number off the uni, which are largely covered in the original - unfortunately this leaves a lot of blue space on the drawing and elongates Schmidt's Torso.

1980 Phillies
I am including this post as part of our 1980 Phillies Series. I hope to return to Schmidt again next year as he is not only one of the  most significant members of that particular team but also the franchise history.

September 6th 2019 marks the 10th anniversary of one of the more memorable moments of Prince Fielder's career. 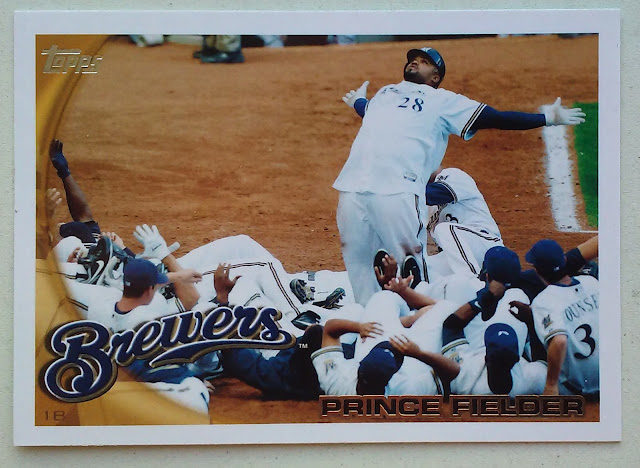 The Brewers defeated the Giants 2-1 in extra innings that day, the winning blow was a Walk-Off Home Run by Fielder. To celebrate the Brewers executed a choreographed bowling style celebration. The moment polarizes old and new school fans. I suppose if you want to pinpoint a moment where MLB decided that maybe it is ok to celebrate big Home Runs might have been Prince Fielder September 6 2009.

The image of that moment was honored by Topps with the lead-off card for their 2010 set.

I did some digging and I believe the photograph was taken by Morry Gash and can be found at AP-Images.  There are a number of similar shots across the net, but this is the only one that I was unable to find any discrepancies between the card and photo. 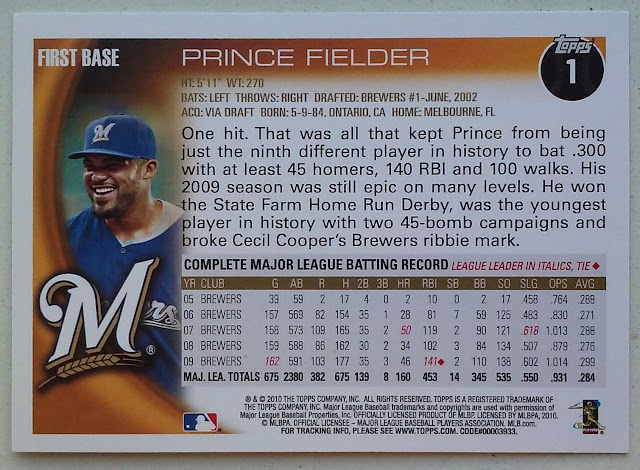 Fielder didn't get the #1 slot just for the September 6th Walk-Off.  He was a superstar player at the peak of his career. Checking his numbers on the card back we notice he lead the NL in RBI with 141. The 46 Home Runs trailed only Albert Pujols (47).

As part of the Derby Topps created a set of jumbo cards that were on display at Citifield for the All-Star game.  I took the above photo at the Futures game.

Stray Observation
The pitcher that gave up the Home Run was reliever Merkin Valdez. In 74 career games Valdez only took the Loss in one game, this was the one.

Little late on this one but Garry Maddox turned 70 over the Labor day weekend. To celebrate we are posting a column on his rookie card. 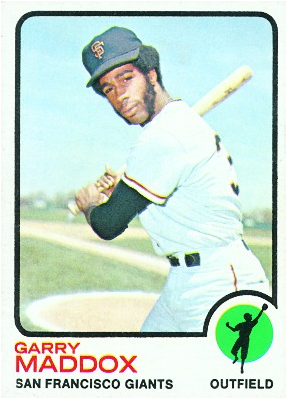 Over here at Phungo Headquarters we think of Garry Maddox as a lifetime Phillies player, but as can be seen above early in his career he spent a couple of years with the Giants. Nice to see Maddox get a solo card here as many rookies from this era were awarded shared cards.

However there is a sloppy Topps element to this card as well.  Garry Maddox was a member the 1972 All-Star Rookie team, unfortunately Topps failed to put the trophy icon on his card.

As part of the Team Phungo Art initiative we have decided to correct this error, and while we were being creative we decided to modify a few other things about the card. 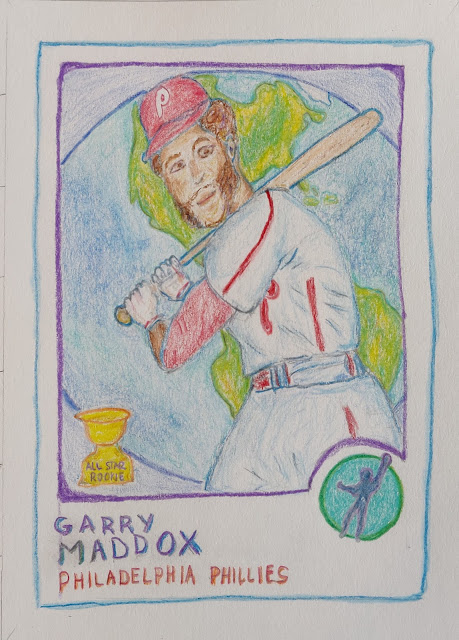 Yes since I was going to the trouble of drawing a new card of Garry Maddox with the Rookie Cup, I figure why not make him a Phillie. I tried to get Maddox face and figure to match the card photo, but with the background I got a little crazy and put in a globe.

The idea was inspired by the quote "Two-thirds of the Earth is covered by water, the other one-third by Garry Maddox." which is often attributed to Ralph Kiner.

So yes in one drawing I made the Topps card my own by 1) Changing the team 2) Adding the missing Rookie Cup and 3) Including a globe in the background to honor Maddox defensive notoriety.

The other reason I did the Maddox artwork was because I thought that this was a fun card on the Maddox player collection checker and I wanted to make the card part of our 1980 Phillies retrospective.

My goal is to put together a dozen or so columns on the 1980 Phils, but since I don't post as often I a starting a little early. A few months ago I wrote up Del Unser which I plan on adding to the collection.

For an index of all 1980 Phillies related postings click here. Not much there yet, but hopefully there will be by this time next year.

Whiz Kids
We also profiled Maddox as part of our series on the 1983 Phillies. That posting will be used as our Garry Maddox Index.

This is an Index to postings about the 1988 Topps All-Star Rookie Cup Team that was honored in the 1999 Set. sources and links
TradingCardDB
Baseball-Reference Bullpen
Posted by deal at 3:27 PM No comments:

This is an Index to postings about the 1998 Topps All-Star Rookie Cup Team that was honored in the 1999 Set. 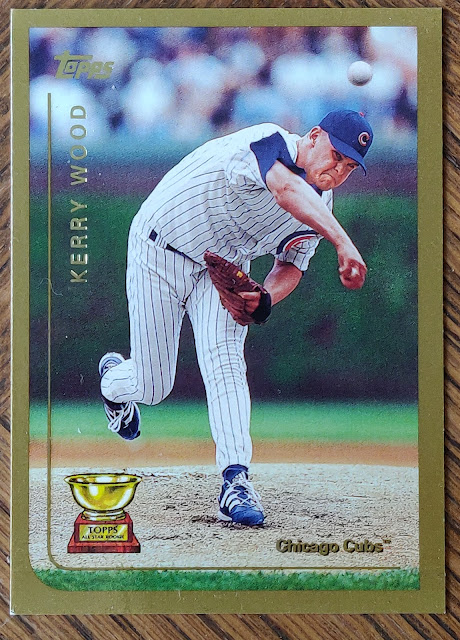