The Phillies recently announced that this years Wall of Fame inductee is Bobby Abreu. An interesting selection, on paper he is one of the organizations great players, however on the field he represents the long lean period between the 1993 Wheeze Kids and the Late 2000s championship squads. 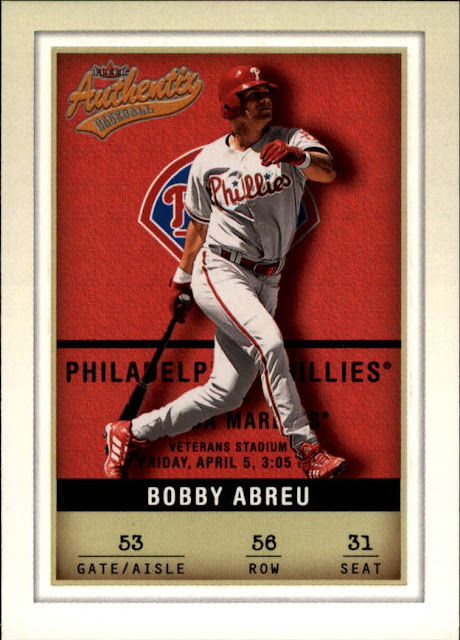 Abreu is often derided for his mediocre defense and to be honest I cannot remember him crashing a wall. Perhaps one of the effects if his tentative approach in the field is that he rarely missed a game. During his eight full seasons with the Phillies Abreu played at least 150 games every year.  An All-Star player never missing game can accumulate some impressive numbers, and Abreu did just that. As a Phillie Abreu tallied 195 Home Runs and 254 steals (7th in team history). His .928 OPS ranks 2nd in club history behind only Hall of Famer Chuck Klein. The component numbers (.416 OBP, .513 SLG) are top 10 as well. Advanced stats really don’t back up the no-defense critique, Abreu’s dWAR in Philadelphia was -1.5, below average but not really noteworthy especially when spread across 8+ season. Related note: during his gold glove 2005 campaign had a dWAR of -1.5. 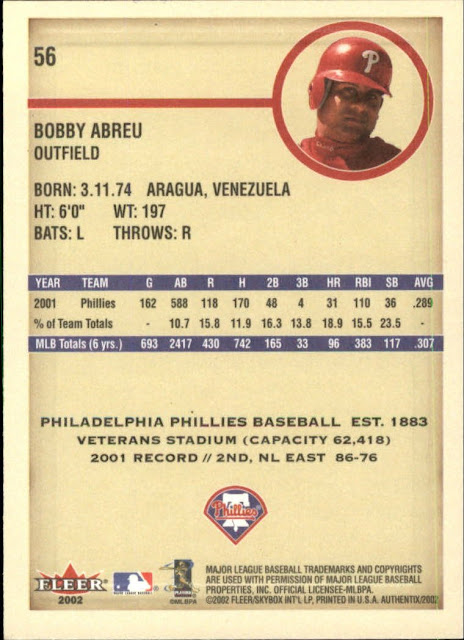 Kind of a neat idea here. The player photos are on a facsimile tickets of their teams Home Opener. In the game represented here the Phillies defeated the Marlins 6-2. The tickets are purely representative – there is no mentioning of the game on either side of the card, nor the games results or how the player performed.

Fortunately for that we have Baseball-Reference.

And it was a good day for Bobby Abreu who went 4 for 4 with a couple of a doubles and a Home Run producing 3 RBI and scoring a pair of runs. Likely one of the best days of his career.

Team Phungo has been to a lot of Phillies Home Openers and this happens is one of those games. Happy to be adding this one to cards that rep Phungo Games.

2002 Fleer Authentix
Two years ago we profiled Scott Rolen's card for this set, that column can be found here. 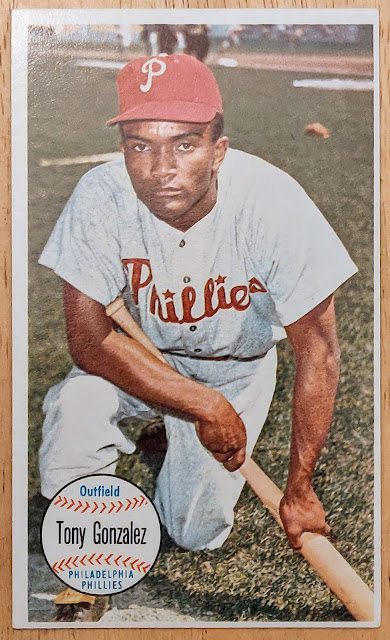