With the Toronto Blue Jays facing elimination tonight we post a card of their Left Fielder Ben Revere who started the season with the Phillies. 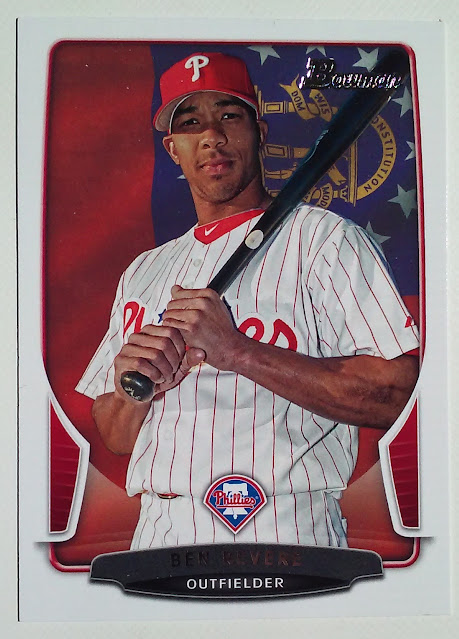 An interesting parallel contained in 2013 Bowman were the State Flag Variation. Although Ben Revere went to High School in Kentucky he was born in Atlanta. Topps elected to go with the players birthplace rather than home state for representin'

I like how there is a wave built into the image of the flag, gives a bit of flavor to the card. 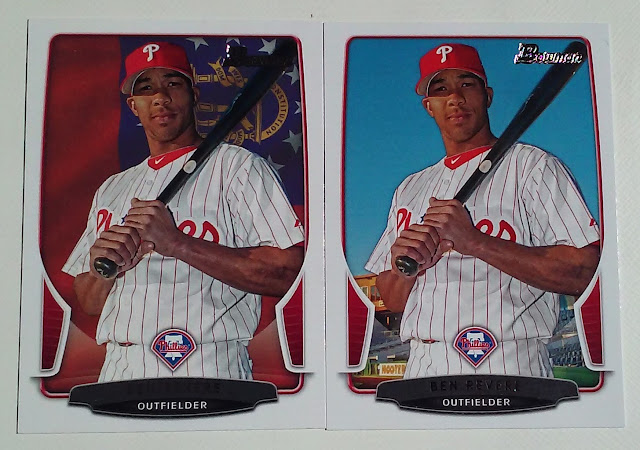 Here we have the Parallel contrasted with the base card, only quibble here is that the variation loses the Hooters ad. 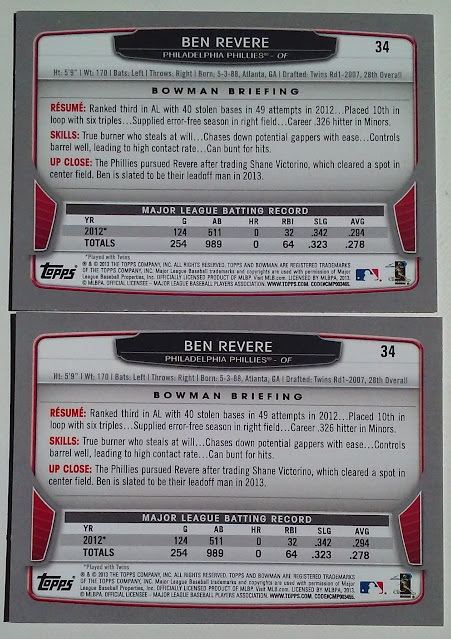 Tonight the Philadelphia Flyers open their 2015-16 campaign on the same day that the Toronto Blue Jays play their first Postseason game since Joe Carter hit his home run off of Mitch Williams.

Lot of good and bad in that first sentence but I am posting a card that always puts a smile on my face. 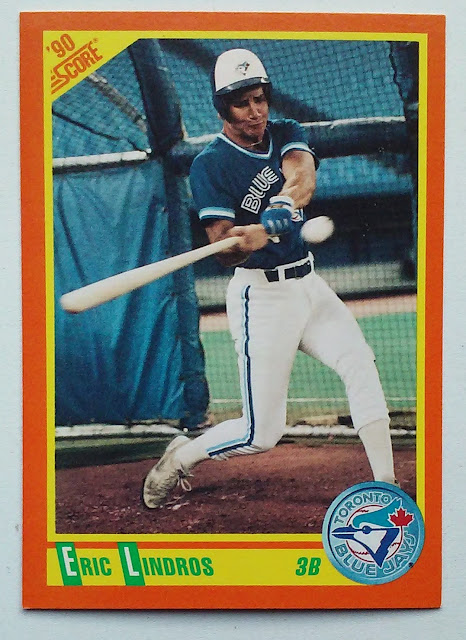 Apparently Eric Lindros tryout with the Blue Jays didn't get very far as a quick search of his name in Baseball-ref turned nothing.

Regardless among commons it is a Phungo Favorite. In addtion to the subject there are other fun elements to the card: The 'L' in Lindros is reverse italic and shadowed, giving it the appearance of a hockey stick and  Score's Orange borders foreshadow Lindros' 1992 Acquisition by the Flyers. 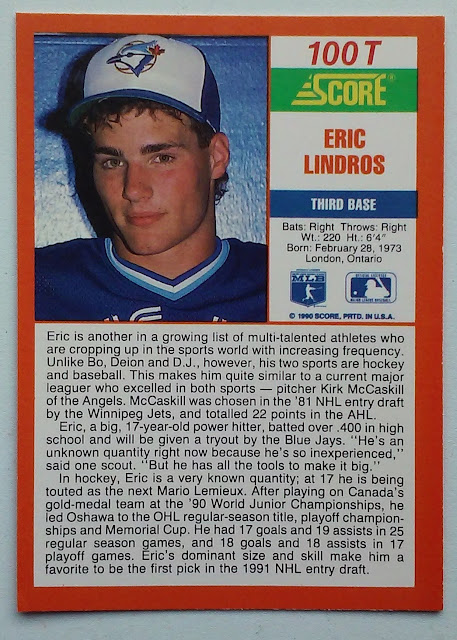 Boy do I miss the days when cards had significant copy. In addition to a paragraph mentioning the 2 sport baseball players of the era (Bo Jackson, Deion as well as Hockey/Baseball cross-over Kirk McCaskill)  Score also documents Eric Lindros Pre-NHL draft exploits. Pretty impressive set of numbers on his  Junior/OHL resume.

In tonight's Wild Card game the Host Pirates will be sending out their ace Gerrit Cole. 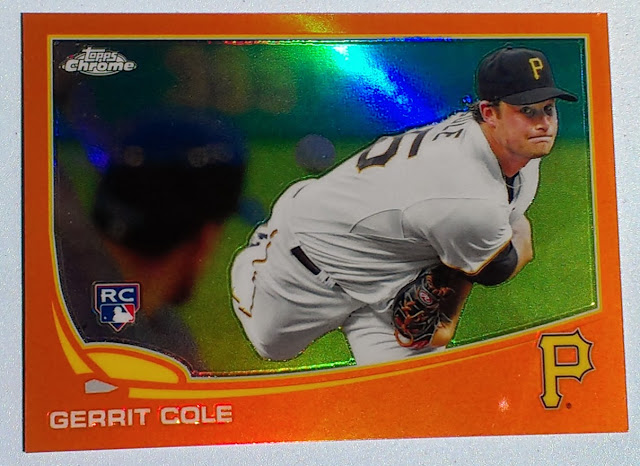 I believe this is from the bonus parallels that showed up with racks of 2013T Chrome. The combo of the Pirates Black & Yellow with the Topps Orange parallel and the season this is the perfect Halloween card.

I will be rooting for the cross-state Pirates tonight and hope they don't run into any unfriendly ghosts.

With Jake Arrieta going for the Cubs and Cole (19-8, 2.60 ERA, 148 ERA+, 4.5 WAR) for the Pirates, I am expecting an exciting pitching matchup with some bizarre batting hero in tonight's winner or go home special. 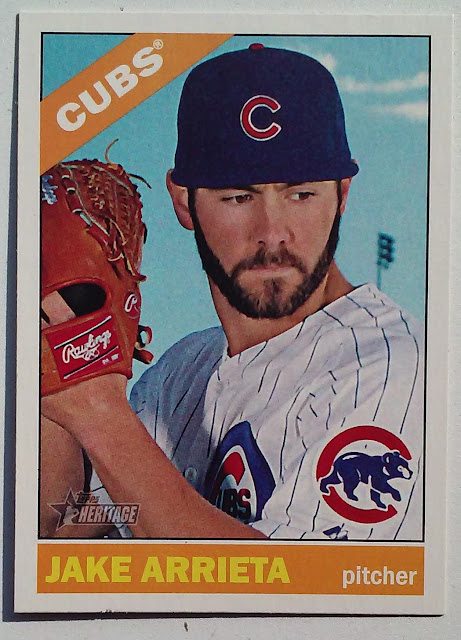 Vanilla 2015T Heritage photo. I felt as though there was more variation in the pix this year so I found this shot less annoying than I may have in past seasons.

Jake Arrieta starting emerging into the player that the Orioles hoped he would become last season. Unfortunately by then they had traded him to the Cubs. Now the 29 year old Righty as blossomed into a full blown Ace. 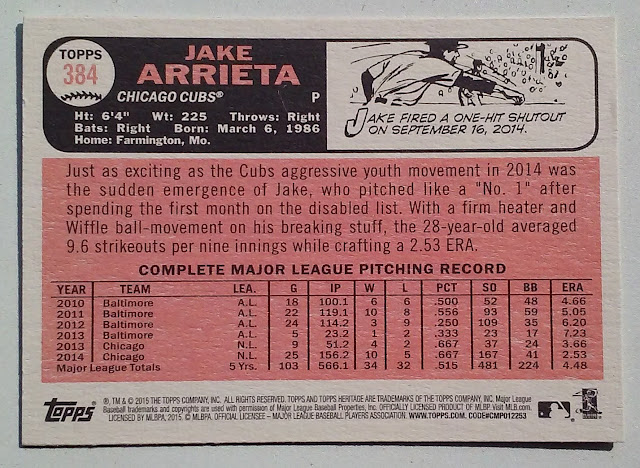 The game mentioned in the -toon was a 7-0 victory over the Cincinnati. An 8th innings double by Brandon Phillips was the lone blemish on Jake Arrieta's day as he faced one over the minimum recording 13 Ks on 110 pitches. 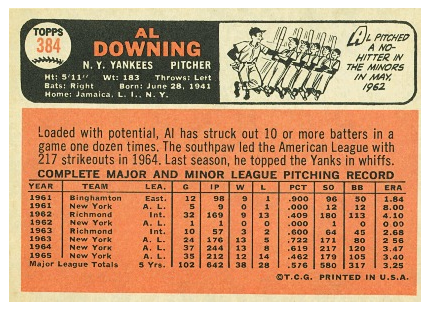 Jake Arrieta numerical partner from 1966T is Al Downing who played for the Yankees at the time. I find no connection between the two players other than the fact that Arrieta's -toon reference a Lo-Hitter while Downing's notes a No-Hitter - albeit a minor league one.

Arrieta of course did graduate to the no-hitter ranks this season and has pitched very well going into tonight's game.

I don't believe that Jake Arrietta made it onto a lot of inserts sets in 2015, something tells me that he will be a staple next year

The last time the Astros were in a postseason game was game four of 2005 World Series. Pre-Phillies Brad Lidge took the loss in the game, he is now retired. Craig Biggio batted leadoff for the Astros, he was just inducted into the Hall of Fame. Brad Ausmus started at catcher - he is currently managing the Detroit Tigers.

Tonight there will be a whole new set of Astros on the field. 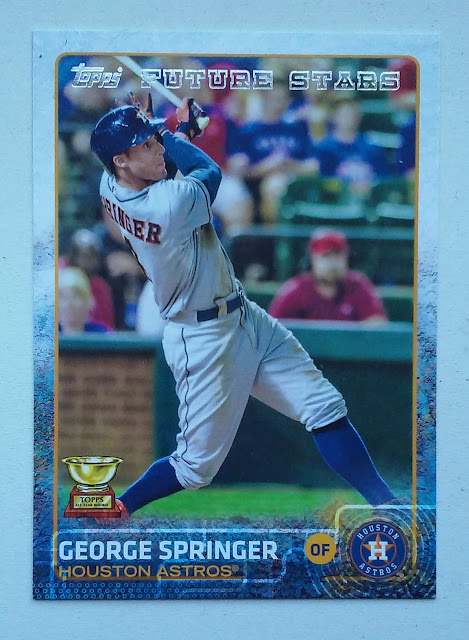 One of those new players will be second year right fielder George Springer.

Prior to the 2014 season Springer was ranked #18 in Baseball America's prospect rankings.  The 11th overall pick of the 2011 draft has put together a pair of solid half-seasons. The trouble is the other half of the last two years Springer has been on the shelf. His rookie campaign ended due to a lingering quadricep injury and this year he missed two months with a broken wrist.

While on the field his Springer has hit 36 career Home Runs in 683 ABs, His .276 BA this season is a vast improvement over last years .231. During each of the last two seasons a potent 126 OPS+.

Springer's dWAR number in 2015 was a positive rather than the negative it was a year ago - this has helped put him at a +3.8 WAR this season an improvement over his rookie +2.0.

2015 Topps Rookie Cup
George Springer's 2015T card contains the always nice Rookie Cup flair. This card also has a Futures Stars stamp - a tag that Topps brought back in 2014,  Not as much of a fan of this tag, but I am glad Springer got the recognition. 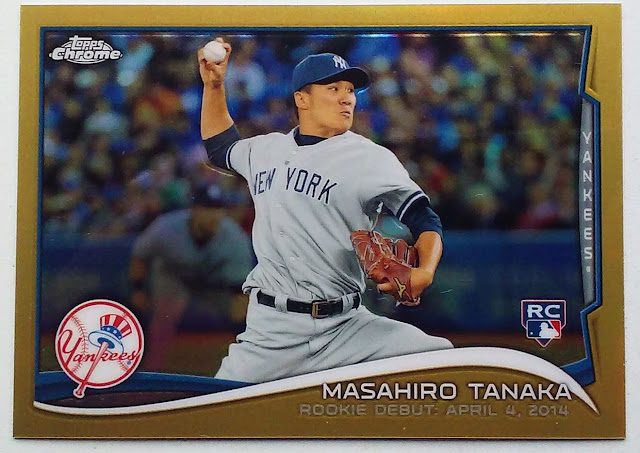 The Yankees will send out Masahiro Tanaka to face the young Houston squad. The Japanese import has had a decent season but is trending downward after a standout 2014. His ERA is up from 2.77 to 3.51, with strikeouts down and  walks and Home Runs up. The ERA+ of 114 is well down from last years 140 however his 3.1 WAR in 2015 is comparable to his 3.3 debut. 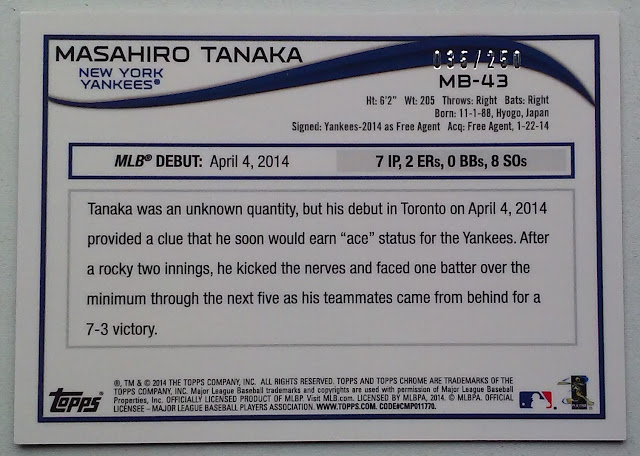 The card notes Masahiro Tanaka's Debut when he started a 7-3 victory over the Blue Jays. Highlights from Tanaka's 7 inning 6 Hit No Walk start included striking out Blue Jays slugger Jose Bautista twice and inducing Adam Lind to ground into a double play in the sixth inning.

If the Yankees are to advance to the World Series Tanaka will likely will have to face the potent Blue Jays lineup once again.

2014 Topps Chrome Update
Chrome Update is a bit of an odd release that was packed only in "Mega-Boxes" paired with Topps Update - thus the MB- prefix for the card number. This pack pulled Tanaka card is probably one of my luckier strikes in the past year. It is serial #d and I imagine if the Yankees go deep in the playoffs it could get some collectors excited.

Note the card has the RC shield but is not considered a Rookie Card. Tanaka was definitely included in the standard issue of 2014T Chrome and likely other releases as well.

Thirty Years ago Phil Niekro became the oldest pitcher to ever toss a shutout, he did with his 300th victory. 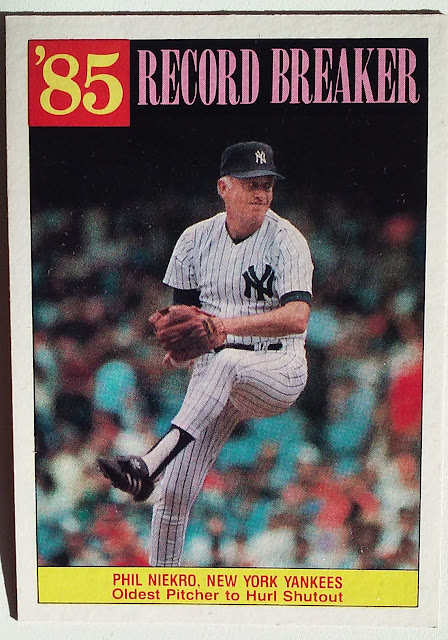 Topps 1986 Record Breakers noted the achievement with card #204. The Yankees gave Niekro a lot of run support in the 8-0 victory over the Toronto Blue Jays. Don Mattingly had a Home Run and scored 3 times and outfielder Henry Cotto tallied four RBIs including a 2-run homer.

Phil Niekro gave up 4 hits in the shutout striking out 5 and walking 3. Notables in the Blue Jays lineup included MLB Dads Cecil Fielder and Jeff Burroughs. Niekro Kd Burroughs swinging for the final out of the game. In an interview by Claire Smith of the Hartford Courant Niekro noted he only threw 3 Knuckleballs in the game, he last 3 pitches to Burroughs.

OCD Phungo would like to note the game was played in Toronto, however on the above Topps card Niekro is clearly wearing the Yankees Home Whites. 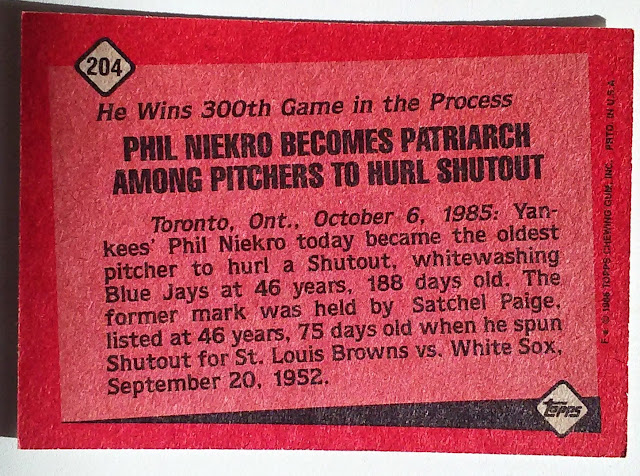 Topps notes that the standard for eldest pitcher to toss a shutout was previously held by Satchell Paige who as a member of the St Louis Browns shutout the Chicago White Sox 4-0 on September 20, 1952. In his shutout Paige also struck out his final batter, Minnie Minoso. The ageless Paige also went 2-3 with an RBI as a Batter in the game.

On May 7th 2010 the Phillies Jamie Moyer eclipsed Niekro's shutout standard by blanking the Braves 7-0. 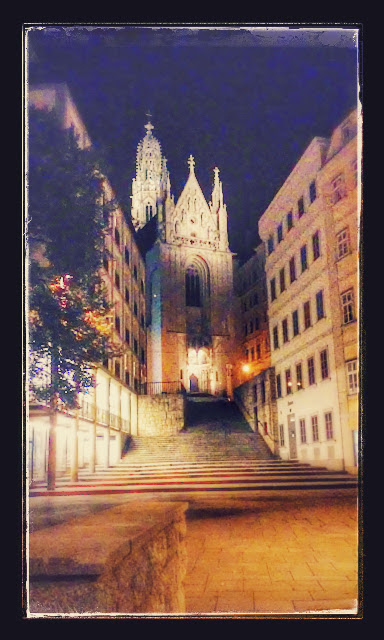 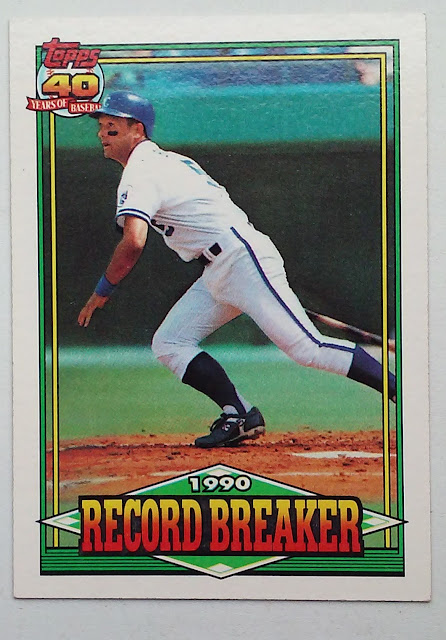 All three titles were in different decades which had not been done prior. Topps honored the achievement with teh #2 card in the 1991 set. 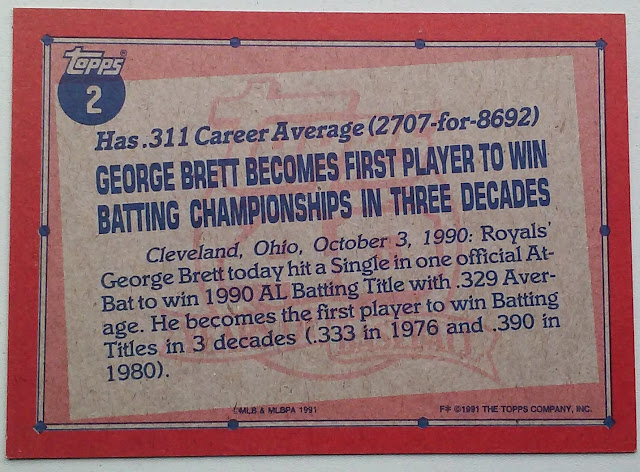 On the final day of the season Brett singled during a 5-2 loss to the Indians in front of a massive Municipal stadium crowd of 5,196. The hit came off of journeyman reliever Mauro Gozzo. George Brett's .329 average bested fellow Hall of Famer Rickey Henderson by four points. Rickey never won a batting title, his .325 in 1990 was a career high as was his 2nd place finish. Henderson did however lead the league in OBP (.439) in 1990 and won the AL MVP Award. Advanced analysis now also reveal that Henderson led the league in WAR (9.9) 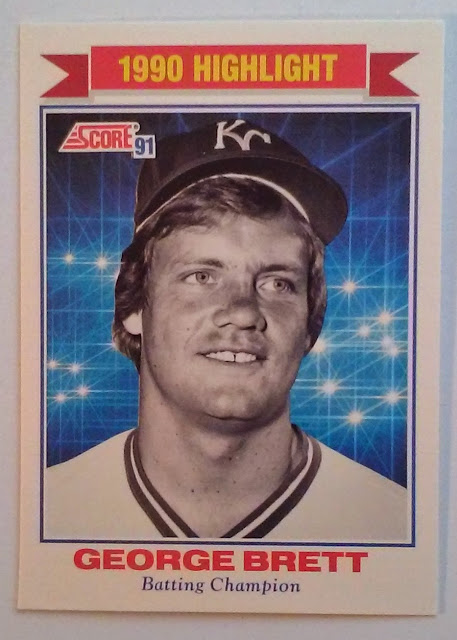 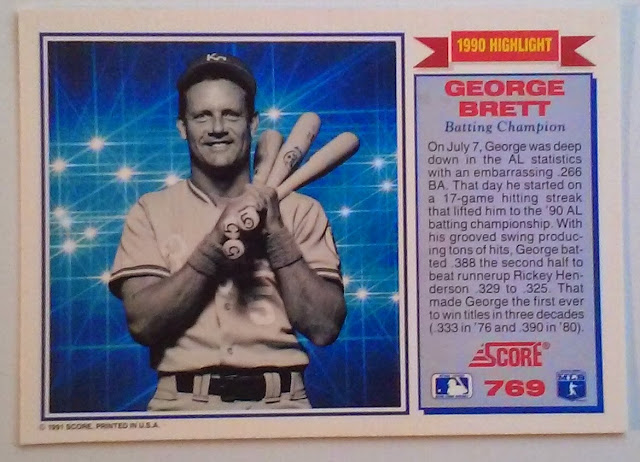 Score tells us a bit more about the course of Brett's 1990 campaign. His final .329 season average only came about because of an impressive second half where he batted .388.

I like the shot on the back of the card. Brett carries three Bats on his shoulder likely symbolizing his three titles - each of the bats carries his uniform #5 on the knob.

On October 2nd 1965 Chris Short set the National League Record for Strikeouts in a game. 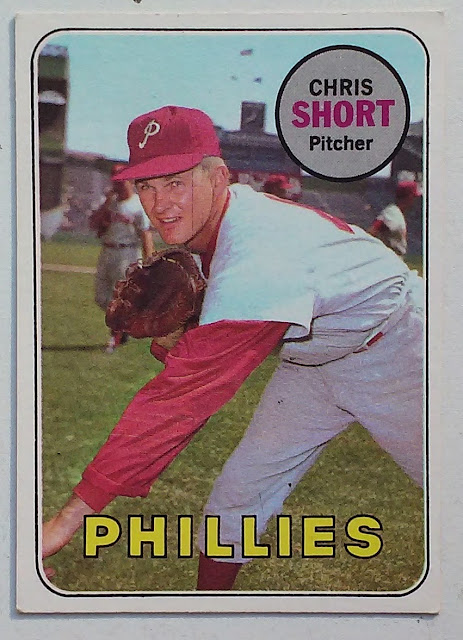 In the 2nd game of a double-header versus the Mets Short struck out 18 batters tying the modern National League record for Ks in a game. Short's 18 punch outs came over 15 shutout innings rather than the standard 9 and is not typically recognized in lists of high strikeout games.

The reason Short pitched 15 innings despite not allowing a run is that the Phillies were unable to score versus the Mets Rookie Pitcher Rod Gardner. In only his 5th career major league appearance Gardner also tossed 15 shutout innings, more than doubling his career total at the time.

In the end neither team scored and the game was suspended after 18 innings.

Gardner was Short's number one victim with 4 Strikeouts, Danny Napoleon took home a golden sombrero - even though he did not start. Joe Christopher struck out 3 times as well, but one of the Ks was versus Phillies reliever Jack Baldschun. 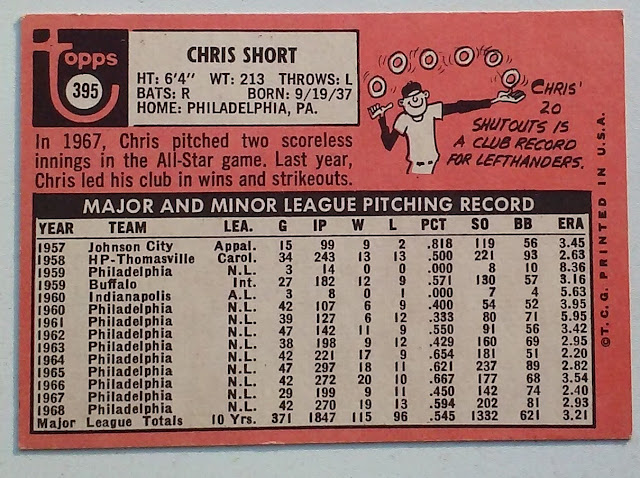 This is the 3rd Topps Card issued for Short who debuted in 1959 but did not get signed by Topps until 1967.

Chris Short added 4 more shutouts to the team record mentioned in the -toon. His record 24 career Shutouts for the Phillies was eventually eclipsed by Hall of Famer Steve Carlton (39). The franchise shutout record is held by Grover Cleveland (Pete) Alexander (61)

The Box for the All-Star game referenced in the text can be found here. Among the 7 batters Short faced were future Hall of Famers Harmon Killebrew (popout) and Carl Yastrzemski (Walk). The final batter Short faced was hometown Angels All-Star Rep and future Phillies Manager Jim Fregosi who struckout.

Jim from Downingtown has an interesting post on the 67 All-Star game here, it includes vintage newspaper photos from the era. One of the pix is of Dick (Richie) Allen with Hall of Famer Tony Perez.