Topps commemorated the event with an insert in the 2011 Heritage set. 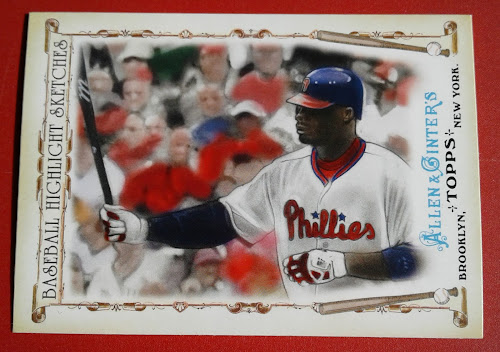 Howard's Home Runs was part of a 10-6 Phillies victory over the Florida Marlns. It was the 28th of 31 Home Runs that Howard would hit in 2010 - good enough for 8th in the league. 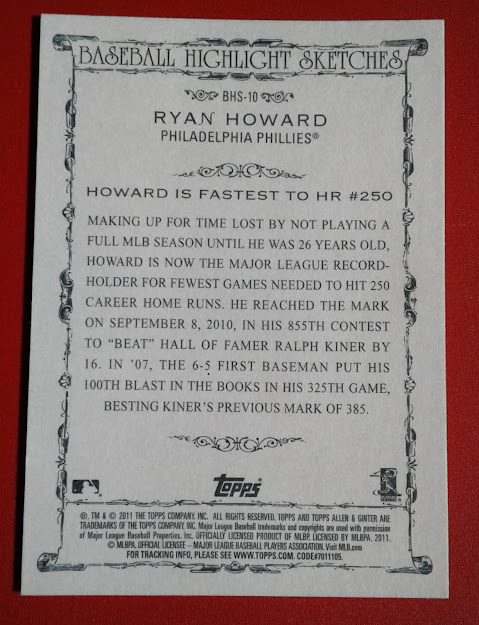 Kiner's 250th Home Run occurred in 1951 during a Pirates 5-4 loss versus the Boston Braves.

2010 Ryan Howard at the Crossroads

In 2010 was basically mid-career - the 7th of 13 seasons. He had 855 games in the books and 717 remaining. Unfortunately the bottom half of his career did not match the promise of Howard's start. After averaging 46 Home Runs a season from 2006-2010, Howard would hit 33 in 2011 and then never post more than 25 again. The downward turn due to a combination of a devastating injury that occurred at the end of 2011 NLDS and the rigors of age.

Ryan Howard's final 717 games would yield 132 Home Runs - Not terrible, but roughly half the pace of those record setting first 250 Home Runs.

The more you learn about Seaver the more interesting he becomes. He was more than a ballplayer, He was a devoted family man, a vintner, and a connoisseur of the arts.

One of his many interests popped up recently when I saw the cartoon on the back of Tom Seaver’s 1974 Topps card. 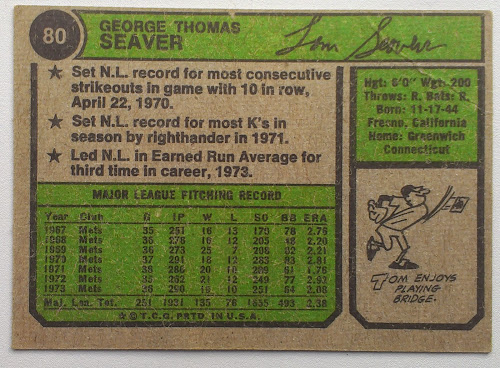 Tom Enjoys Playing Bridge. Mildly interesting… Then last night while re-reading my notes from the Warhol Project I came across an enjoyable blog posting written by Phillip Richter, a schoolmate of Tom and Nancy’s daughter Sarah. An excerpt from the column read:

While walking and talking and tending to the vineyards, Tom made the comment that pitching is like playing bridge. To be a really successful pitcher you have to get inside the mind of the batter. Is he having a good day? Will he wait for a fat pitch or just aggressively strike at anything served to him? What are his goals? How consistent a player is he? Your goal as a pitcher is to control the outcome. Tom said that it was his job to control where the ball was going to go should the batter connect with the ball and make a hit.  I know next to nothing about baseball but Tom’s complex and astute thesis was logical and so well articulated. It made all the sense in the world. I would never have seen parallels between the game of bridge and the art of throwing a baseball at high speed. Tom knows that I’m not a crazed baseball fanatic but I have always had huge admiration and respect for his many incredible accomplishments. Back in the day I was around for a lot of his career highlights–like when he got his 300th win in 1985.

Tom Seaver just doesn’t play bridge, he plays bridge the way he pitches or pitches the way he plays cards. The article was written in 2016, Seaver would have been 71 years of age – 30 years removed from his final pitch, yet here he is making parallels between two games he loves. 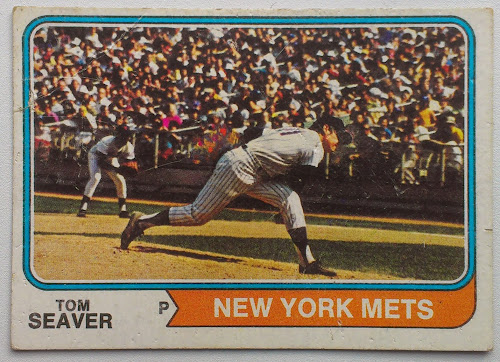 I have always loved this card, great action shot of an absolute legend - good use of the landscape format in the mainly portrait style 1974T set.

The card re-drew my attention earlier this summer as part of a Project2020 inspired activity spearheaded by @_gritz_ of Project 62.  Gritz posted a randomish page of 9 noteworthy trading cards. Similar to Project2020 the assignment to the world of amateur artists was to redesign the card – Project2020 for the common folks.

One of the cards posted was the 1974T Seaver. 1974 has the best -toons and I had to flip the card over. That is where I spotted the comic. Once I saw it I knew that was the route I was going: 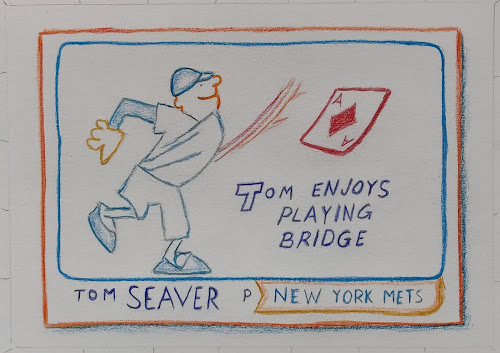 In creating my own Tom Seaver card I kept the 1974T design – in a simplified format. The original comic is more portrait – I have changed it to Landscape format which necessitated moving the copy. I added a touch of color to the lines – keeping the Mets 1974T flavors. My biggest remaining modification was identifying the card being pitched by Seaver as the Ace of Diamonds – which he truly is.

It was a fun card to do and I think of Tom Seaver as a happy individual who was able to pass that joy on to those around him, I hope this Phungo Original captures that vibe.

Links to other folks that have Tom Seaver Memorial Postings: