Yesterday we got the sad news that Rollie Massimino had died at the age of 82. 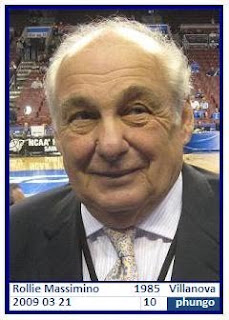 I am not originally from the Philadelphia area but I will always remember the 1985 Villanova Wildcats championship team. Winning that game made me a fan of the team for life.

I never expected to live in the Villanova community, but life's twists & turns brought me to a place where I reside less than five miles from the campus. The team has now returned to prominence and it is fun to be able to follow the local team.

March Madness 2009
I have gone to the opening rounds of March Madness when it has been hosted in Philadelphia several times. In 2009 I was checking out the lower level prior to the game and talking to a friend when Rollie Massimino passed right in front of him. We mentioned to Rollie how much we enjoyed the 1985 Championship team. He was congenial said thanks, shook our hands, posed for a picture and signed our tickets - the smudge and the fact that it is signed upside down are my fault.

Regardless it is a cool memory to have and one of the more fun artifacts in the Phungo museum.

Phungo Card
The picture I took made it onto a Phungo card back when I still made them. This is pretty early in the Phungo canon so we have a pretty vanilla design with the text being a snapshot from an excel spreadsheet. Pretty primitive, but considering my minimal graphic arts skills at the time, I am pretty proud of the finished product.


Wiki
I have a posted a few dozen of my photos to Wikipedia, this is the first of those pictures.

Earlier this month we got the news that Darren Daulton had died.

The beloved catcher was the anchor of the 1993 NL Championship team. 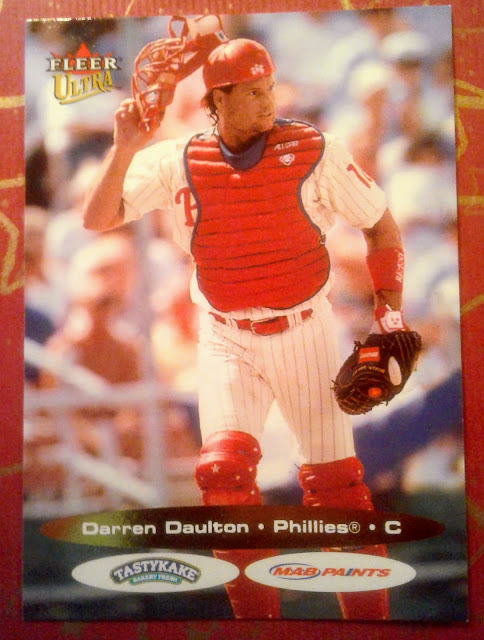 Ten years later he also beat out Bob Boone for the honor being the catcher on the Phillies All Veteran Stadium Squad.

The day the Vet closed the Phillies gave out 12 card packs of cards honoring the All-Vet team. Most of the players were either members of one of the three teams to play a World Series at the Vet (1980, 1983, 1993).

The Phillies lost to the Braves 5-2 that day, but it didn't matter. As fan I was there to say goodbye to the Vet and recall all the good memories I had at the venue.

Darren Daulton's passing occurred shortly before Alumni Weekend and the Phillies honored the All-Star catcher by painting his #10 behind the plate. Alum introductions closed with a about a dozen of his 1993 teammates entering the field wearing his #10 jersey and encircling the plate area in tribute.

The above photo is one that I have simply titled "Three Catchers". The pix was taken between innings, at the right you have Jorge Alfaro entering the frame while Cameron Rupp exits. The two were both on field at one time because Alfaro was either on-deck or on base during the previous half inning while Rupp was in to warm up the pitcher. The third catcher in the picture is Darren Daulton, memorialized here by the #10 behind the catchers box at home plate.

This is an Index to our postings related to Darren Daulton. 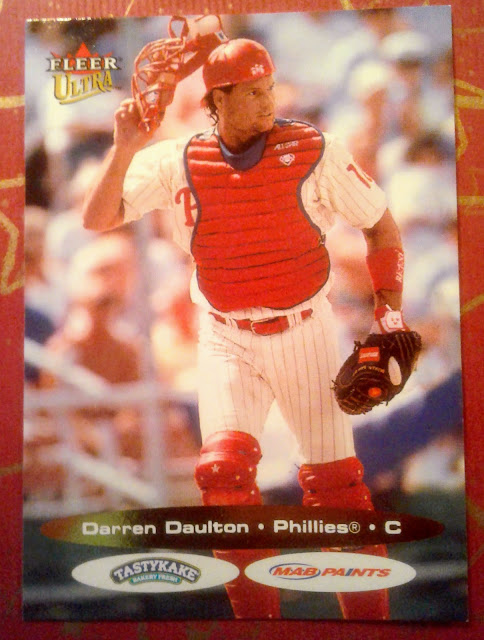