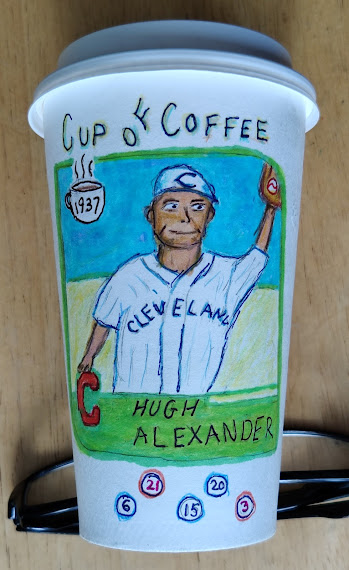 Earlier this month Major League Baseball honored the film "Field of Dreams" by playing a game in Dyersville Iowa near the films shooting location.

I have never watched the film but have seen bits and pieces. From what I gather Catch was basically a love story set during the Cape Cod League.

Of interest to us at Phungo HQ is that one of the characters in the film was based on Cup of Coffee player, Hugh Alexander. The character is a Phillies scout in the film played by John C McGinley (Perry Cox on Scrubs). 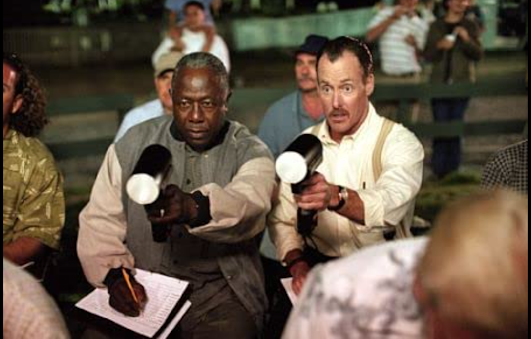 John C McGinley (right) as Hugh Alexander, the other guy is some dude named Hank Aaron.

At the age of 19 Hugh Alexander got into 7 games with the 1937 Cleveland Indians. Unfortunately during the off-season Alexander was involved in an accident while working on an oil well, the accident cost him his hand. His brief baseball career was over as well.

The Indians stepped up and hired Alexander as a scout. Alexander would excel as a scout discovering several players including Don Sutton, Allie Reynolds, Davey Lopes, Steve Garvey, and Dale Mitchell.

I went with the year of the "Summer Catch" release for the cup design, 2001 Topps. There are very few card issues for Alexander's playing year, 1937. The circled numbers below the card represent the five players mentioned above, 6 - Garvey, 21 - Reynolds, 15 - Lopes, 20 - Sutton, 3 - Mitchell. Alexander's glove is show extending out of frame to symbolize the hand he lost.

This is the 9th and final card of Series 2, we will be taking a few weeks off and returning with Series 3 in the fall. If you have an idea for a future Cup of Coffee subject please let us know.

This past March when we introduced our Java feature on Twitter. One of the first comments was from @HeavyJ28 who mentioned a very notable Cup of Coffee player, Eddie Gaedel.

Five months and 17 cups later we grant HeavyJ His Wish. 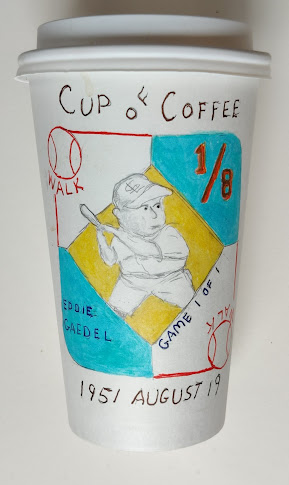 Today marks the 70th Anniversary of the Eddie Gaedel game.

On August 19th 1951 Gaedel pinch hit for Frank Saucier in the bottom half of the first inning of a St Louis Browns Game versus the Detroit Tigers. The 3’7” Gaedel walked and then was removed for pinch runner Jim Delsing. The strategy did not help the Browns who lost 6-2.

His SABR Biography is worth a read, sometimes inspiring but mostly tragic (https://www.baseball-reference.com/players/g/gaedeed01.shtml)

1951 Topps, the same year as the game. The image is based off of the AP Photo most baseball fans should find familiar. 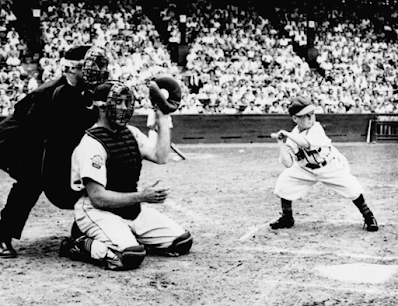 For the game portion of the card we chose "WALK", in the top right we have Gaedel's uniform number 1/8, and across the bottom we have the date of the Game.

The column has been quiet because I have been spending my free time with a sketchbook.

This does not mean I have given up on baseball or card collecting, most of the sketches are of baseball cards.

One of the projects that I have been working on is a series of "Cup of Coffee" players drawn on, yes, Coffee Cups.

The first subject of the Series was John Paciorek who at the age of 18 had a perfect batting day during a Houston Colts 13-4 victory over the New York Mets.  Paciorek started in Right Field went 3-3 with a pair of walks and scoring four times. 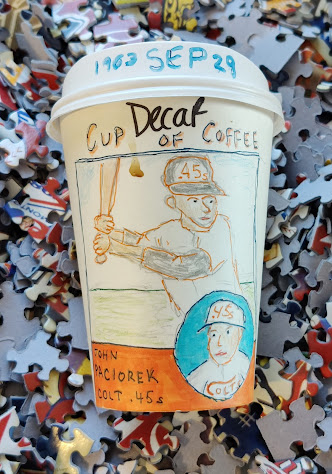 That game was played on September 29 1963, John Paciorek would not play another Major League Game.

He already had a bad back that would only get worse the following spring. He eventually had spinal fusion surgery which helped his back but hurt is game. In 1968 he retired from professional baseball.

John Paciorek was never issued a baseball card during his career however he was immortalized in a comic: 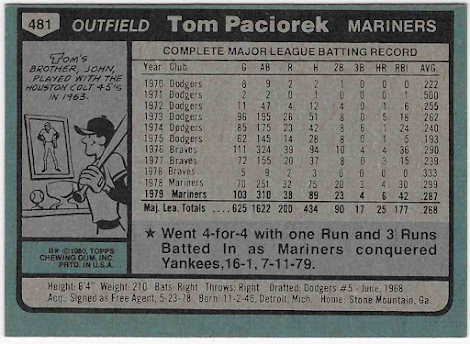 1980 Topps #481 Tom Paciorek (b-side)
John's brother Tom also made it to the majors, he was fortunate enough to have an 18 year career. The comic on the back of Tom's 1980 Topps card features a nod to John's game with the 1963 Colts.
Canvas
Since John did not have a baseball card, i needed to create one for the cup. Going with 1963 Topps was an obvious design choice, for the cards image I used a photo that was on the cover of John's biography.
That's right, there is a biography of John Paciorek, a Cup of Coffee player who appeared in a single major league game. 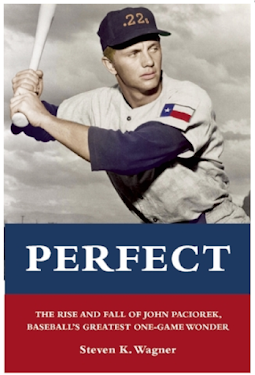 Perfect - Steven K Wagner
Beyond that I wanted to add the phrase "Cup of Coffee" to each Cup and the date of the players game. For John Paciorek I put the date on the lid.
To date we have put together 16 Cups featuring 18 subjects which I have been releasing periodically on Twitter. I hope to also post the cups here to create a more permanent record of the players and their accomplishments.
If you have an idea for a Cup of Coffee player, please let us know and we will put them on the roster. Thanks Team Phungo.