This month marks the 70th anniversary of the Pittsburgh Courier naming an All-Time All-Star team.
The Courier was an African American Weekly with a lot of baseball coverage.  In 1952 the paper surveyed 31 of the top baseball men in the country
On April 19th 1952 they published the results: 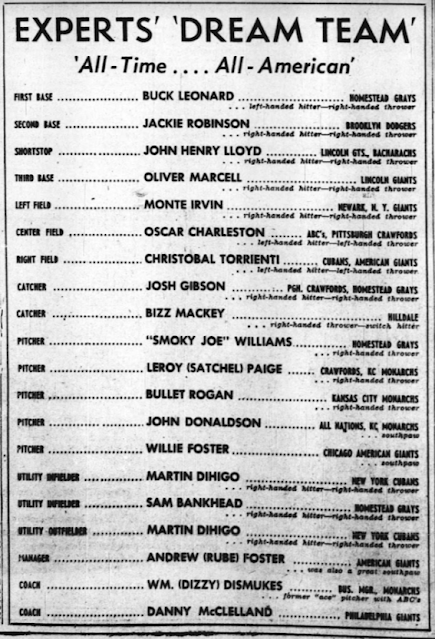 As part of our latest ArtCard Project we have taken the 1952 Courier Selections and created cards for several of the players using the 1976 Topps All-Star subset.
Battery 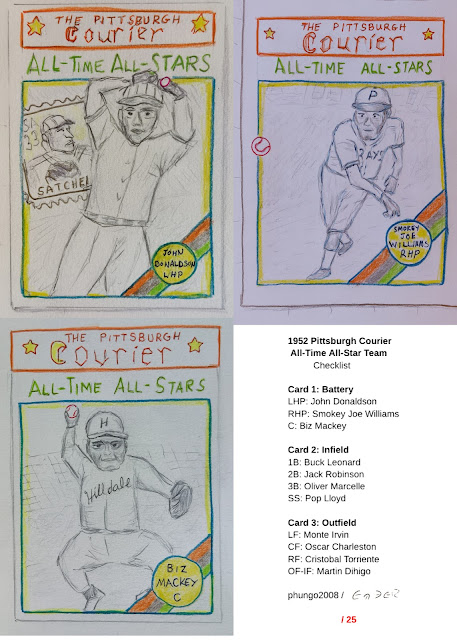 First we have the Battery. LHP John Donaldson was a showman who created a blueprint of how to make money outside of segregated MLB - this same idea would be adopted by Satchel Paige. To show this relationship we added a nod to Paige in the form of a US postage stamp behind Donaldson. Smoke Joe Williams and Biz Mackey who played for the Philadelphia area Hilldale Daisies round out the battery selections.
Infield 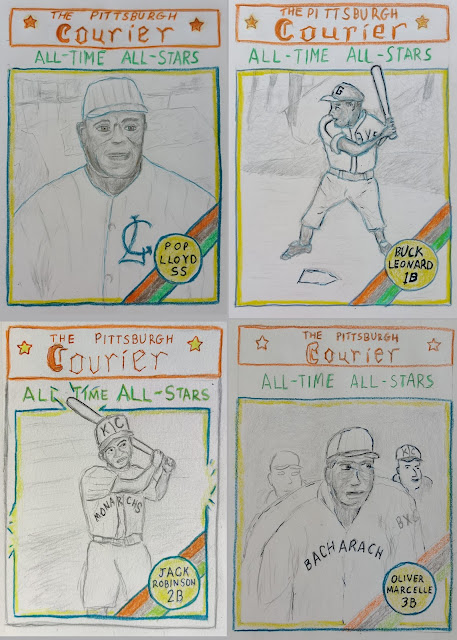 The Infield is let by Jackie Robinson who we show here "Breaking Barriers" of the card/frame. We don't know a lot about Oliver Marcelle but his nickname was ghost, an image we added above his right shoulder. Above his left shoulder we have his son Ziggy Marcell who played in the 1930s era Negro Leagues.
Outfield 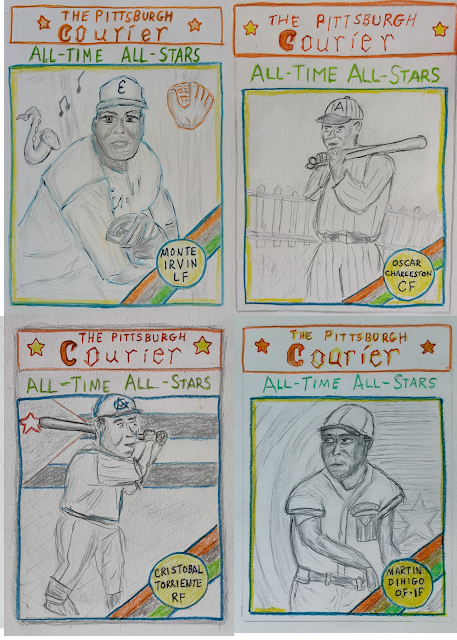 We conclude with the Outfield. Both Cristobal Torriente and Martin Dihigo are natives of Cuba and we have added the countries flag for each. There flairs on Monte Irvin's card represent the day that he went out to purchase a saxophone but instead came home with a baseball glove.

If you want to delve more into the Pittsburgh Courier selections here is the full page from 1952. You will need to click on the image and expand it to read the details. 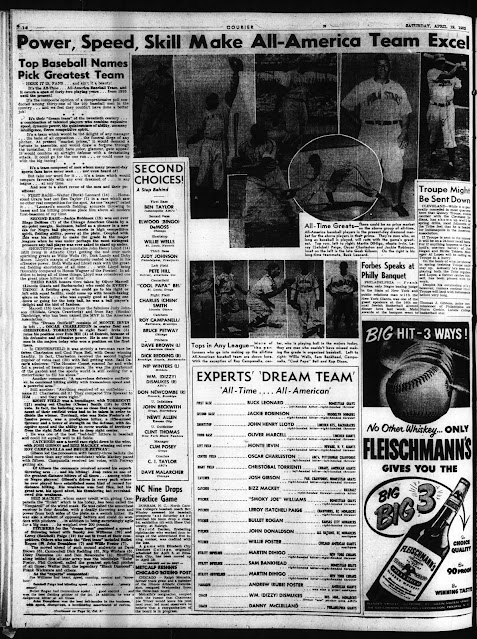 Our Final features two teams from the Middle 1960s. The challenger is the overall #4 seeded 1966 squad Oliva's Army led by fresh HOF inductee Tony Oliva. They will face #1 seeded team from 1965 captained by Joe Morgan. Both teams enter the final undefeated at 4-0.
1960s Final Game 1:
Oliva's Army gets the upset in game 1, Wally Bunker moves to (3-0) as he shuts down Little Joe's on 5 hits and a single run.
Game 2
For the 2nd time in the final Frank Linzy and Wally Bunker square off in a pitchers battle. Linzy (3-1)  avenges his game 1 loss with a 6-hit shutout. The W gives Little Joe's a 2-1 advantage going into game 4.
Game 4
Little Joe's capture the 1960s Tournament with a 6-5 victory over Oliva's Army.
Tony Perez hits a pair of Home Runs to run his tournament total to 4 and takes home MVP Honors 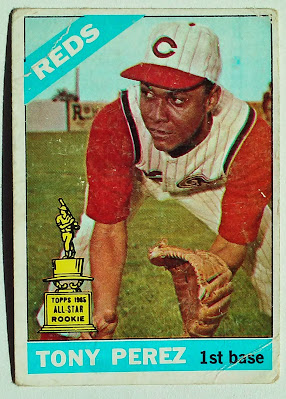 We are down to the final four of the Topps 1960s All-Star Rookie Cup Tournament.
These four teams will be featured in a pair of best of 3 SemiFinals to determine which two face off for the best of the 1960s Final.
SemiFinal A - Team Boog (1963) vs Olva's Army (1965)
Oliva's Army take game 1 behind the strong pitching of Wally Bunker and a Home Run from the Phillies Dick Allen. 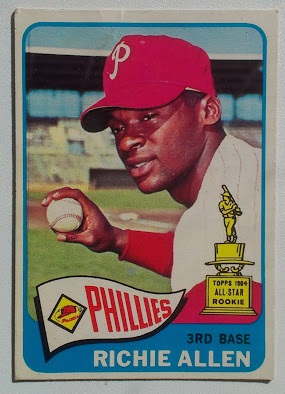 1965 Topps Dick Allen
In game 2 Oliva's Army completes the sweep, Rico Carty's Home Run is the difference maker.
With that sweep the undefeated Oliva's Army (4-0) become our first team to advance to the Final.
Lets see who they will face.
SemiFinal B - Charlies Hustlers (1964) vs Little Joes (1966)
Frank Linzy pitches a Gem and Little Joe's take game 1
Little Joe's (4-0) eliminate overall #1 Seed Charlies Hustlers which sets up a Final between two undefeated teams.
Finals
The Pitching matchups will be as follows.
For odd numbered Games
Two Undefeated teams, Little Joes will go in as the top seed. Originally the Little Joes were seeded 2 and Oliva's Army 4.
Posted by deal at 6:17 PM No comments: 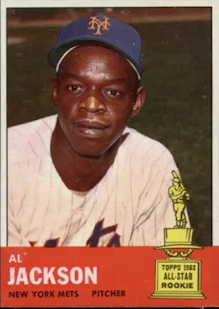 1963 Topps #111 Al Jackson
SemiFinals
The Semi-Final Pairings are set:
In Our Next Posting we will find out which of these four teams will face each other in the Final
Posted by deal at 7:47 PM No comments: