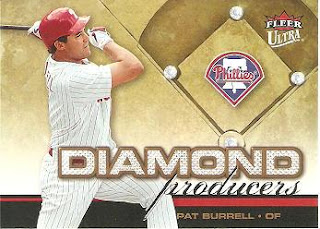 In a mid-August showdown of potential playoff teams the Phils beat the Dodgers 9-2 on Saturday. Cole Hamels gave the Phils 7 quality innings, giving up only two runs which occurred in the third when Hamels gave up a double to James Loney followed by a Home Run by Russell Martin on back to back pitches. Pat Burrell paced the offense with a 5 RBI day including a 3 run homer off Dodgers rookie prospect Clayton Kershaw. It appeared that Kershaw was having trouble locating his off-speed pitches most of the game and the Phils were able to capitalize when he had to throw fastballs for strikes.

Plus – Phils offense pounds out double digit hits for second consecutive day. Perfect weather! Fairly quick game ended in 2:41. There was a pre-game Barbecue hosted by Garry Maddox for his Youth Golf & Academics Program, a charitable organization set up support children in troubled city neighborhoods. Chowing down on some great BBQ for $10 towards a charitable cause was much better than the customary ballpark prices.

The Phils pitchers managed to hold Manny Ramirez to only a single in the game. This is a photo of Manny batting in the 9th inning. 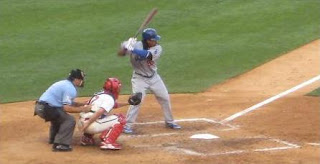 Around the League – Mets Lose. Phils pull to within 1.5 games of first place.

Useless Info – So Taguchi, uniform #99, flew out versus Joe Beimel, uniform #97 in the 7th inning. This has to be one of the highest uniformed number hitter-pitcher combinations to ever face each other (196)

On Deck – The Phungo travel team is hopefully headed back to Baltimore this week to catch Jim Thome and those Chicago White Sox.