Once again we featured an Auto of an Old School Hall of Famer and the Auto was identified easily.  Congrats to Phellow Phils Phan Dawgbones who Spotted this weeks Sig in just four minutes. 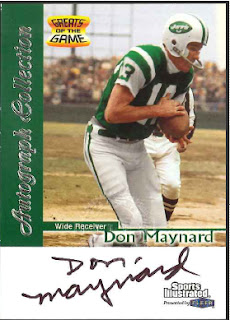 Don Maynard was part of the 1969 Jets team which was led by Joe Namath and upset the Baltimore Colts in Super Bowl III.  Maynard was a prolific AFL Receiver who still holds the career record for Yard per Reception among players with over 600 catches.

Maynard played in the AFL, NFL, CFL and WFL - His AFL career spanned the entire 10 years existence of the league. He was elected to the Pro Football Hall of Fame in 1987.
STS! Bonus
Dawgbones picks up a Double and one of the four bonus questions putting men at first and second for his squad.
The STS! Bonus Qs broke down as follows:
Packers Score: 31 - GregZ of Paschke (31)
Steelers Score: 25 - CalJr3000 of Too Many Grandersons (26)
ToP: Packers 26:35 - also Too Many Grandersons 28:00
MVP:  Aaron Rogers - Dawgbones
STS! Standings After 2 Innings
Autograph Cards - Representing the Kansas City Royals:  Men on 1st and 2nd
Plaschzke/Argyle - Brooklyn Dodgers: 1st and 2nd
DawgBones - Lehigh Valley Iron Pigs: 1st and 2nd
Too Many Grandersons - Tigers: 1st and 2nd


The opening innings have been great, with lots of new players.  I promise you that the 3rd inning will be tougher then the these first two.  This week we will return to our regular Sunday Night starting time.


You are welcome to join the game at anytime. If you need more Spot the Sig! details click here.