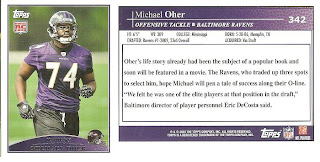 
There is likely no baseball card for Michael Lewis, in lieu of that I am featuring this Baltimore Ravens Rookie Card of Michael Oher which was featured here in 2009.  Oher is a Tackle for the Ravens and the subject of the Film adaptation of one of Lewis' other books "The Blind Side"

I find it odd timing for the film version of "Moneyball" to surface.  The book is from 2003, the Baseball Draft featured in the book occurred over 9 years ago.  I think at least part of the reason the movie finally got done was the success of "The Blind Side" in 2009.
Michael Lewis is a gifted writer, and  have read several of his books - many of which are related to business and finanacial tycoons.  He takes what otherwise may be a dry subject and adds interesting and funny insights and anectdotes.
While Moneyball is a non-fiction work, inevitably part of the story and the Moneyball version of Billy Beane is the creation of Michael Lewis.  One can give you straight facts, but the author still chooses which facts to keep and which to ignore and Billy Beane comes out of Moneyball pretty favorably - the same cannot be said of field Manager Art Howe.  The Paul DePodesta character goes by a different name in the film version of the story as DePodesta would not sign off on the veracity of the script.
Michael Oher
The Blind Side was a box office success and can currently be seen on cable movie channels.  Micheal Oher has also proven to be a success at the NFL level as well starting all 32 games for the Baltimore Ravens in his first two seasons.  Oher has written (w/ Don Yaeger) his own Biography "I Beat the Odds".
Moneyball 2011
Past Moneyball 2011 related posts:
Billy Beane
etc
Here is a link to a Moneyball and Collecting related article in Beckett that I first saw referenced by Chris Olds via Twitter.
Posted by deal at 12:37 PM