Andy from HighHeatStats noted this AM via twitter that today is the anniversary of the day in 1996 when Kirby Puckett woke up without sight in his right eye.  He was diagnosed with glaucoma. His career as a Major League Baseball player was over. 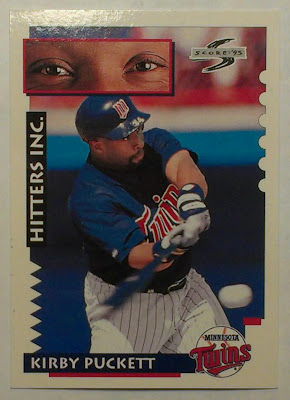 This card as always freaked me out.  I mean how many cards go so out of the way to feature a players eyes? And those are the eyes that betrayed Kirby Puckett and basically ended his Hall of Fame career.  Freaks me out when I think about it.

The Puckett discussion led Andy and I down the path of Hall of Famers that died prematurely - and moments later HHS had a posting regarding the life expentency of HoFs.  The internet age is impressive.  Turns out Kirby Puckett is the first HoF from the 1960s to pass away and appears to be the 2nd youngest to die post enshrinenemt (Lou Gehrig was also inducted prior to his passing)
Posted by deal at 5:11 PM