One of the most notable Wheeze Kids was Hall of Famer Joe Morgan. 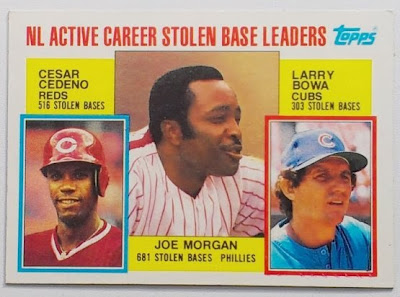 Regardless of what folks may think of Morgan as a broadcaster he was a helluva ballplayer.  Most people remember him from his days with the Big Red Machine, but he was also played second base for the Phils during their 1983 NL Pennant winning season.

Morgan was down to his penultimate season by the time he got to the Phillies and his age was showing.  He only batted .230, but he did have a good World Series. He hit a game tying Home Run in the only game of the series which Phillies won. In the last post season AB of his career Morgan Tripled off of Scott McGregor. It was the last hit of the Phillies season.

The Big Red Machine
The Reds are The Great Eight of the Big Red Machine. The centerpiece of the event will be Joe Morgan weekend which will feature the unveiling of a statue of the Hall of Famer. For more information on Joe Morgan Weekend click here.

1984 Topps Active Leaders
The Active Leaders Subset from 1984 is a great one for Phillies fans. The set celebrates Career Leaders in 9 different categories and since the Phils were the Wheeze kids in 1983, they are well represented. Morgan, Pete Rose, Mike Schmidt, Steve Carlton, Larry Bowa, and Tony Perez all make appearances. The set consists of 18 cards (9 per league) and runs from #701-#718