June 10th marks the 60th anniversary of an historic game between the Cleveland Indians and Baltimore Orioles. That Day Rocky Colavito became the 6th major league player to record a 4 Home Run game.

The Indians won that game 11-8 with Colavito accounting for 6 RBI. Notice that the above card features Rocky as an Athletic not an Indian. Well that is because of the back of the card... 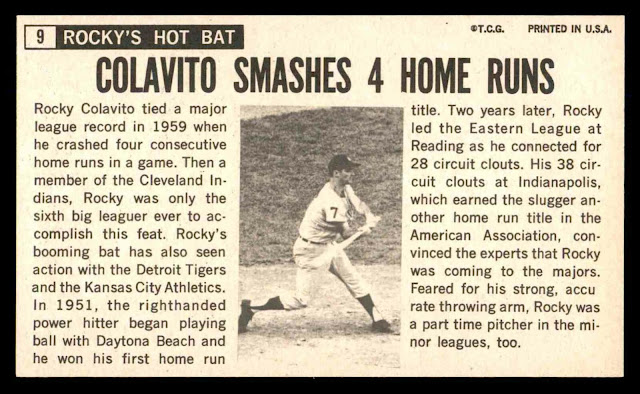 As we can see the headline on this card is all about the 4 Homer game which is described in the cards first coupe sentences. The remainder of the text discusses Colavito's home run legacy all the way back to his minor league days.

Rocky Colavito's four home run game is also featured on the back of a 1964 Topps base card, #109. Colavito, however, does not appear on the front of that card, to find out more click here.

Sloppy Topps
The photo on the b-side of the card is also not with the Indians. Colavito wore three different numbers with Cleveland 6, 21 and 38 but never 7. The two squads for which he donned #7 were the Detroit Tigers and Kansas City A's. I am thinking that this photo is with the Tigers as Rocky Colavito didn't join the Athletics until 1964. The front appears to be an Airbrushed Tigers photo as well.

1964 Topps Jumbo
I love this set and I have it on the back burner to build. They are referred to Jumbo or Giant cards because they are oversized at just over 3"x5". I go with Jumbo because when you search on "1964 Topps Giant" you get a bunch of Willy Mays cards, but not necessarily Jumbos.

Awesome card! I absolutely love this set. It's my favorite vintage oddball set from the 60's.

I just found out last week (after reading a "where is he now" internet story) that I was in Colavito's town on Memorial Day, and didn't realize it. He lives in a small burb in central PA.