During the Bicentennial 44 years ago Rick Monday became a Patriotic Hero by saving an American Flag from being set afire at Dodger stadium. 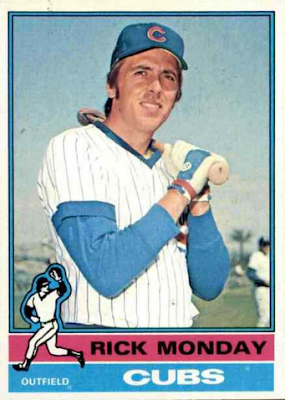 This is the card that Topps issued of Monday in 1976. Couple of things I like about this card - first off collectors recall the simple design of 1976T which features a team related color with a complimentary color on the name plate. The photo appears to be taken at Spring Training - notice that Monday is wearing a Home Uni yet there is a palm tree in the background beyond his left elbow.

I am always a fan of identifying bat knobs on cards. Here we can sort of see Monday's #7 which he wore most of his career.

The final item I want to point out is the position icon. It is a point of interest in that becomes the focus on a 1976T design. Each position has a different icon including unique artwork for Left and Right handed pitchers.  For outfielders like Monday the player is show flagging down a fly ball.

Baseball iconography is actually pretty rare in Topps designs. This is really sad and it is getting rarer as Topps moves to using generic formats that can be used for multiple sports, films and other media. 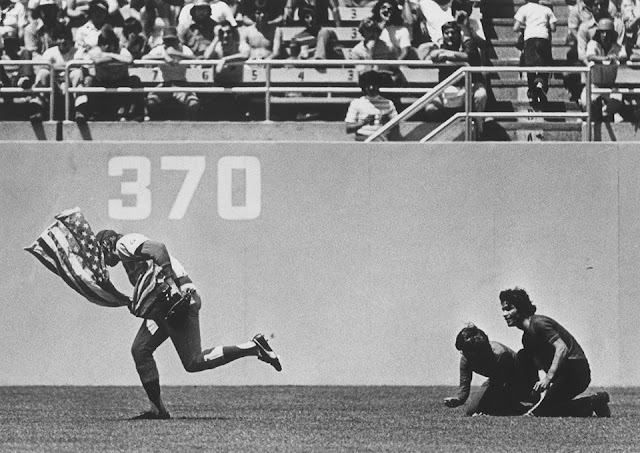 Photographer James Roark caught the above iconic image of Rick Monday saving the flag.  The picture was nominated for the 1976 Photographic Pulitzer which ended up awarded to a different photo taken in April of 1976 that also involved a flag.

For me the Outfielder icon used on 1976 Topps echoed the James Roark photo - it easy to see the fielder running with a Flag rather than Flagging down a baseball.

This similarity inspired me to create a Phungo Original... 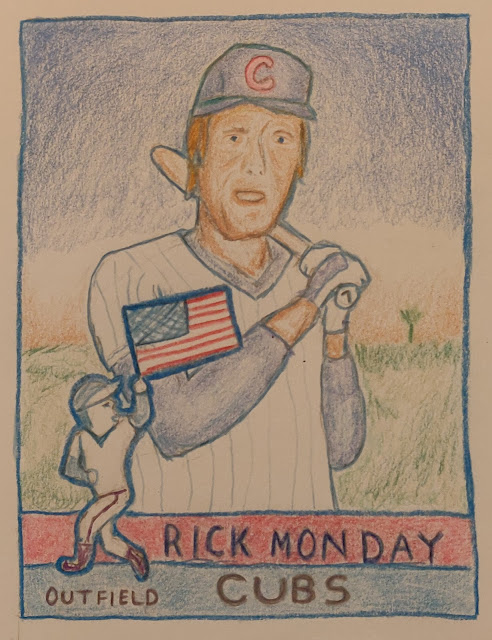 For the most part I tried to keep the everything about the card the same as the Topps. I enhanced the Cubs logo a tad and kept the palm tree because I liked how it balanced the image. The 7 on the bat knob is enlarged as well.

The most significant change is adding the American Flag and making it prominent in the frame.

I have always liked when a trading card can tell a story and I am happy that 1) this idea came to me and 2) I was able to execute it to my satisfaction.