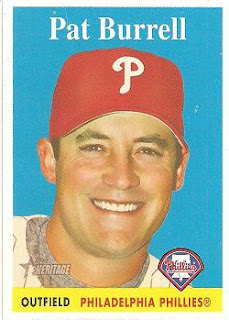 Another big hit for Pat last night. As I have mentioned before, I feel that there is a chance that Burrell may be in his last year in Philadelphia. This means that if things don't go the Phils way in the next four games, today's game in Philadelphia might be the last one Burrell ever plays in front of the home fans. Of course, I hope the Phils manage to win several more games this year and we will get to see Pat Burrell play as a Phil in the World Series.