As you're well aware, the Phillies will be competing in their first World Series in 15 years. This week I am going to feature posts related to the five previous Phillies teams to compete in the World Series. 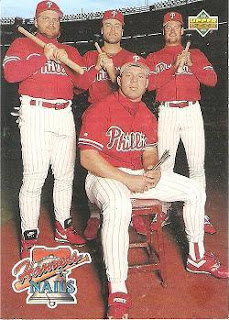 The 1993 Phillies simply are one of the most loved teams in Philadelphia History. And this great card sums them up. The 93 team flat out bashed the ball - sure they had Curt Schilling and a bunch of other solid pitchers but they won on their hitting. Thanks to guys like Dykstra and the Krukker they seemed to always have men on base and then Dauton and Hollins would drive them in.

The 1993 Phillies shocked the perennial NL Champion Atlanta Braves in a 6 game NLCS but would ultimately lose in the World Series, also in 6 games, to the Toronto Blue Jays.

Philadelphia fans get a lot of bad pub for how they treat their athletes - oddly, Mitch Williams has had a fairly unexpected post playing career. He has become an incredibly popular figure in Philadelphia. Williams consistently shows up on sports talk shows and with quality information and analysis while also giving his honest opinion. He also spends some time hawking is salsa. I haven't tried the salsa, but I do enjoy having Mitch around. It's a story that took a weird turn and has had a happy ending - A nice story for Mitch for the Phils and for Philadelphia.

If you want to see a great card related retrospective on the 1993 Phils check out this series of posts that was written earlier this year over at Capewood's Collections.
Posted by deal at 8:17 PM

Do you live in Philadelphia? I was wondering if the town is going "Phillie Crazy".

Thanks for the link. I had a lot of fun doing that series. I'm planning to eventually do the same for the 1983 and 1980 team.