Play at the Plate ran one of my favorite kinds of contests - A random Winner Contest! Those happen to be the kind I am best at - and guess who won!

The Prize in the PATP contest was a 2010 Topps Chrome Value Pack. Seen a lot of these around the blogs and it was fun to open my own pack.

I was hoping for a cool Rangers card to send back PATPs way but unfortunately came up empty - The 3 packs plus Orange Pack also lacked Phils but were fun to open. Here are the Highlights:

As with other Topps Products the Mantle is card #7 in 2010 Chrome. Jury is out on the Orange - cool idea having basically an extra parallel pack of cards in with a 3 pack retail product. Kind of weird - I think of Chrome as a parallel set to begin with and they just keep adding parallels to it. 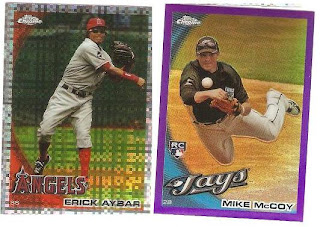 I think the Purples are 1:12 so those come at about 3/box in retail. Aybar is one of those steady Middle Infielders that none of us folks on the East Coast no anything about. Mike McCoy is a career minor league player who finally broke into the majors in 2009 at the age of 28. 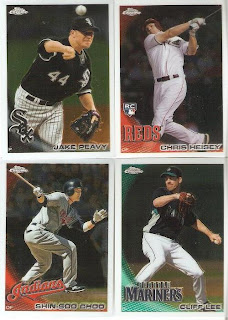 Chris Heisey is an intriguing player to me - I went to school with a group of brothers named Heisey that were all very good athletes. From his Bio have determined that Chris Heisey went to college very close to my hometown. Have not tracked down weather he is related or not, but I am following the talented prospect.

And of course after Monday Night's performance what Phillies post featuring cards from a Rangers fan would not be complete without mentioning Mr Cliff Lee.

Thanks to Brian over at PATP and hope this gets the Rangers some Mojo 2nite as they face the Yanks.
Posted by deal at 10:31 PM