I am hoping to bring the Hall of Fame feature back to Phungo for a while now.  With the latest edition of A&G trending throughout the card blogs, I thought that I would take a look at a mini from the 1975 Topps Series.  Recently Bad Wax mentioned the set as a possible goal that is fun and affordable. 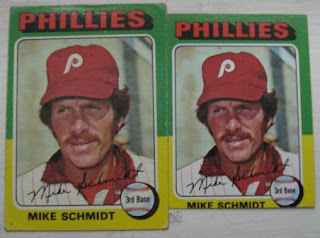 Mike Schmidt is a perfect subject to restart Hall of Fame Profile with - He is probably the Phillies most iconic Hall of Fame Player - Of the four Phillies Hall of Fame Players that have played since 1950 he is the only one that played his entire career with the Phils.  22+ years after his retirement, Schmidt's 548 Home Runs still rank 15th on the career leaders list - five or six of the guys that have passed him in those 22 years would probably need to have an asterisk* next to their names in some record books.


Schmidt won 3 NL MVP awards and a World Series in 1980.  Schmidt led the league in OPS seven times including every year from 1980 thru 1983.  And we cannot ignore the 10 Gold Gloves

For the Collector
1975 is Topps third offering of a Mike Schmidt base card.  It is the 2nd time that Schmidt is the sole player on a card - His 1973 RC is a shared card that also features Ron Cey and John Hilton.

The mini pictured above was picked up at a card show last year for roughly $3.50, I think the Base card is a legacy from my younger days - The corners are a little dinged but overall the card remains in good shape.
Posted by deal at 8:44 PM

I rarely see '75 minis at the few card shows I frequent. If I do, it's always the stars, like Schmidt.