When your favorite team trades a player you like, it is always hard to take - but if it is the right move, you cannot deny the positive impact.  Following the 2007 season the Phils traded speedster Michael Bourn to Houston in order to pick up Closer Brad Lidge.  Lidge was obviously a Major Contributor to the Phils 2008 Championshiis squad and it was definitely the right move.
I liked Bourn and have followed his career in Houston as he has become an all-star a very good lead off hitter and a Gold Glove caliber centerfielder.  This was all fine while he was playing CF for the Houston Astros. 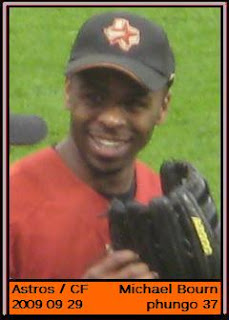 2011 Phungo #37 Michael Bourn
Unfortunatley, Bourn has been traded to the Phils division rivals, the Atlanta Braves.  When it is all over I think both the Braves and Phils get in this year, but I don't look forward to facing the pesky Bourn in a potentential playoff match up if it occurs.
It's a shame that things didn't work with the Astros for Bourn who is from the Houston area.  Regardless I hope his career continues to prosper, except when he faces the Phils.
Posted by deal at 12:37 PM