A few weeks back as part of Moneyball 2011 we profiled Tony LaRussa.  In the interest of equal time today we are going to look at Ron Washington.

I had forgotten that Ron Washington had a role in the book.  Washington is the man saddled with the task of moving Scott Hattieberg to first base  - Hattieberg is the broken down catcher w/ the bum arm, but he gets on base at nearly a 40 percent clip.
The Ron Washington character in the film is minor, yet arguably has the funniest line in the movie.  The 2011 World Series is still fresh in our memories and we all know where Ron Washington has gone since Moneyball.  He was a strike away from being a World Serieis winning manager.  He has also piloted the Rangers to back to back AL Crowns.  I am not sure he is a great manager yet or a good manager with a really good team.

The toughest season may be in front of the Rangers.  With free agency and player movement you only get so many chances at a title.  The Rangers have a lot of storylines I like - Josh Hamilton, Nelson Cruz, Neftali Perez, Nolan Ryan etc.  I would like to see them remain relavent on the national stage. 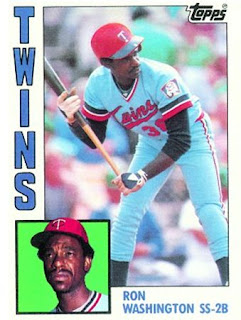 Apparently Washington's playing career goes back to 1977 when he got a callup for the dodgers.  I didn't see a Topps cards of him as a Dodger - sounds like a Cards that Never Were opportunty for someone.
Moneyball 2011
Links to  previous MB 2011 posts
Moneyball The Movie
Bennett Miller
Billy Beane
Jeremy Brown
Michael Lewis
Michael Oher
Tony LaRussa
etc
Here is a link to a Moneyball and Collecting related article in Beckett that I first saw referenced by Chris Olds via Twitter.
Posted by deal at 4:24 PM