According to the Baseball-Ref salary estimate Jeff Kent made $86 Miillion playing baseball from 1992-2008.  He was named to 5 all-star teams and won the 2000 NL MVP.  In 2002 he was part of the San Francisco Giants team that went to the World Series but lost to the Angels - Kent had 3 homer in the series.  While he never was on the winning side of World Series he played 65 games for the eventual 1992 champion Toronto Blue Jays prior to being traded for David Cone.  His current ELO rank for Jeff Kent is 138 just above Mark McGwire.  He is a borderline Hall of Famer with similarity comps in his top 10 including 4 HoFs Jim Rice, Sandberg, Santo and Billiy Williams.
With all that money and the MLB accolades I was curious as to Kent's motivation to be on Survivor. 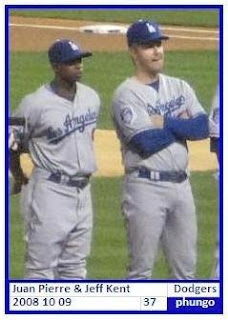 I have come up with 3 possibilities
1) The Money - Although if Kent blew through the $86MM I think the 1 Million that Survivor offers would make little difference
2) The Spotlight - This is just part of the bigger picture, keeping Kent's name out there as he works on a TV/Movie Career.
3) The Competition - He was a professional athlete and enjoys the competition.
With #1 covered above #2 is intriguing.  As far I can tell Kent isn't involved broadcasting or any other role with a team (Dodgers Giants or other).  If Kent wanted to remain out there you'd think that would be an avenue, but he has to this point not chosen to go that route. Perhaps Survivor is a career move for Kent - keeping his face out there for additional TV roles.  He has already appeared in a reality competion series previously, "The Superstars" in 2009.  Kent is from Southern Califormia and perhaps those are just the circles you run in if you are already a celebrity.
Finally we come to the competition.  Kent spent 17 years in the Majors - he was a member of several succeful teams, going to the playoffs 7 different times.  Perhaps Survivor appeals to Kent's desire for competition.  Survivor is "played" more in front of a virtual crowd, but on Monday nights it may be more watched then any game Kent played in outside of the 2002 World Series.
I wonder if Survivor is paying Jeff Kent win or lose.  Survivor is carried by CBS, which is the network that might currently be the farthest removed from Baseball - teaming with a retire MLB star doesn't seem to be the smart way for the network to go, but who knows what those crazy execs are thinking.  .
Once again that leads us back to the spotlight.  I have never really watched Survivor much, but I may peek in a bit this season.  Lisa Whelchel (Blair on Facts of Life) is another Celeb contestant - she wouldn't be enough to get me in the door, Maybe Nancy McKeon (Jo) would get me to think about it.

Phungo Card
The above Phungo Card photo was taken prior to game one of the 2008 NLCS.  Kent didn't start the game but did get an AB as a pinch-hitter (strikeout).  He appears here next to current Phillies outfielder Juan Pierre.

I think it's the competition.

It could be that Kent is a fan of Survivor and he's always wanted a shot at winning. I have more than a few friends who would like an opportunity.

Maybe he used his celebrity status to cross something off of his bucket list?