With Sunday Night Baseball in LA and the recent retirement Kobe Bryant I wanted to take a look at one of the first LA Lakers, Elgin Baylor 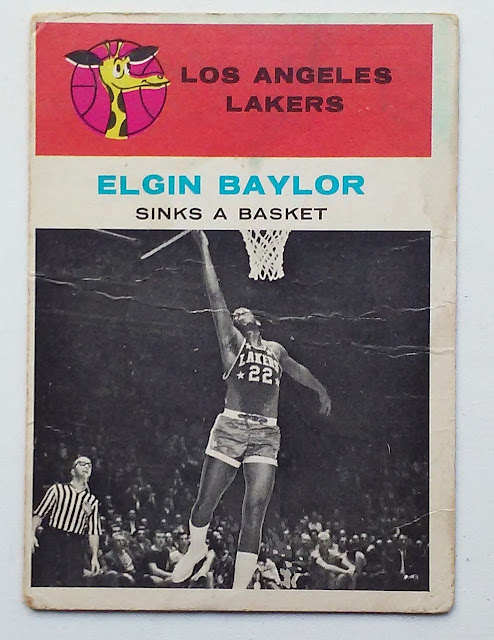 Elgin Baylor played the entirety of his Hall of Fame career with the Lakers, but in two different towns, 2 seasons in Minnesota and a dozen in LA.

The 11 time All-Star earned the Final Four Most Outstanding Player award with Seattle U in 1958. He followed that up by being drafted first overall and winning the NBA Rookie of the Year award for 1958-59.

Baylor was elected to the Basketball Hall of Fame in 1977. Following his playing career Elgin stayed in basketball as a coach with the Utah Jazz and executive with the LA Clippers.  He was named to the NBA All-Time Teams for both the leagues 35th (1980) and 50th (1996) Anniversaries. 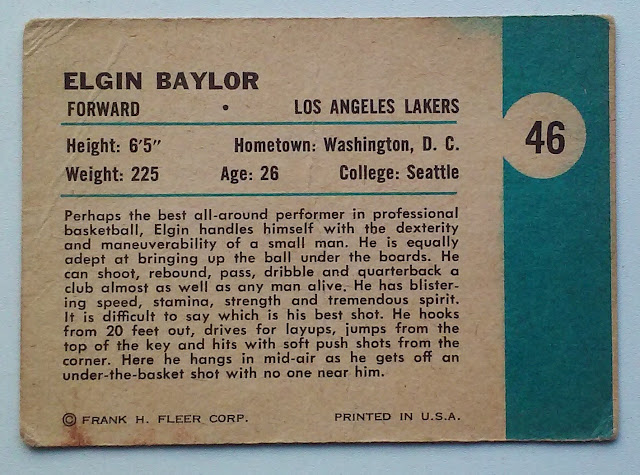 The last 22 cards of 1961-62 Fleer Hoop are Action shots. The simple clean backs don't contain stats but do have a healthy paragraph on the player. In addition there is a nice closing sentence describing the action in the shot on the card front.

Phungo Colleciton V1.0
There are two 61-62 Fleer cards in the Phungo collection, they are both from my childhood collecting years. I am not sure how they came into my hands but I was 11 or 12 at the time, which would have been the late 1970s. I think it my father may have gotten them from a co-worker. At the time they were the oldest cards in the collection.

A Classmate who was a bigger sports nerd than myself had to explain who Elgin Baylor was. That classmate is now working in a University Sports Info Department.