Garry Maddox was edging into the twilight of his career in 1983. The "Secretary of Defense" played 97 games for the 1983 Phillies. 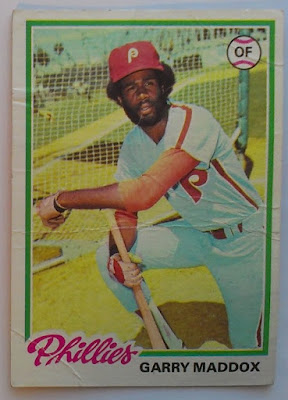 Between 1975 and 1983 Maddox was the starting Center fielder for the Phladelphia Phillies. He was involved in 29 playoff games for 6 different Phillies squads over that time period. He won gold gloves each of his first eight seasons with the Phils - every eligible player with 9 or more outfield gold gloves is in the Hall of Fame.  Maddox's best year was likely 1976 when he hit .330 and finished 5th in the MVP voting behind 3 members of the Big Red Machine (Morgan, Rose, George Foster) and Mike Schmidt.

1983 World Series
Maddox hit the deciding Home Run in the only game the Phillies won during the 83 Series.  By 1983 Maddox wasn't an everyday player for the Phillies and he only started 3 of the 5 games during the Series.

Garry Maddox 2013
Maddox, age 63,  remains involved with the Phillies and hosts an annual BBQ cookout for charity at the stadium.  He also worked as a Phils broadcaster for the now defunct PRISM network. His Son Garry Maddox II also played 7 years of professional baseball reaching as high as AAA for several organizations including the Philllies Scranton Wilkes-Barre affiliate in 2003.