Today's we have 3 Games that will determine which two teams advance form the Bush Bracket to play in the 8 team Major Bracket.

Game 1 Features both of yesterdays winners. The victor advances

Game 3 features Team Boog (63)  vs the Loser of the advance game, Santos Squad (61)
Team Boog wins their second consecutive Elimination Game to advance to the Major Bracket. Kansas City Athletics Outfielder Manny Jimenez is the game MVP with a pair of Home Runs 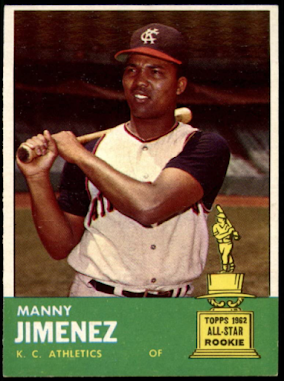 1963 Topps Manny Jimenez
We now have our official field for the 1960s Rookie Cup tournament. The Major Bracket Seeds are as follows:
First Round Pairings:
Be back with more games tomorrow.
Posted by deal at 8:41 PM