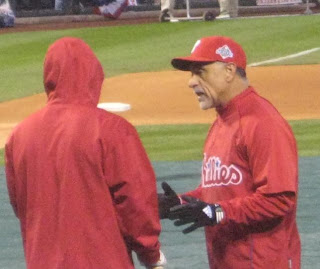 Check here for a brief 2008 commentary on Lopes (and Victorino)
Posted by deal at 1:27 PM

They should have kept Lopes and fired the rest of the staff, including Charlie Manuel!

The Phillies were the top baserunning team in the league. That can be directly attributed to Lopes.

Perhaps he wore out his welcome with the players in Philadelphia,

Phungo, you may be on to something there. Ever since Manuel arrived, the Phillies have cultivated a relaxed (dare I say country-club?) atmosphere, and I believe the players had relaxed themselves (with Manuel's implied approval) into a team that believed they could frequently mail it in based on talent alone, and that they could "throw the switch" when it became necessary to do so. As we all saw in the post-season, they were wrong.

Lopes always seemed like a guy who could not co-exist with that sort of "less than full-bore" mentality. (Maybe the same was true of Jimy Williams.) For the most part, Manuel's coaches have been either long-time organizational men, or someone just happy to have a job.

I found myself thinking last night: "What would the 2010 Phillies have done with a vintage Sparky Anderson at the helm?"