The Phils are out of the postseason playoffs.  while I have not completely recovered from their ouster at the hands of the St Louis Cardinals I still enjoy baseball enough that I am try to watch the other playoff games whenever possible.

There are very few players with Philly connnections on the four remaining squads, but one of those players is Phungo Household favorite Randy Wolf. 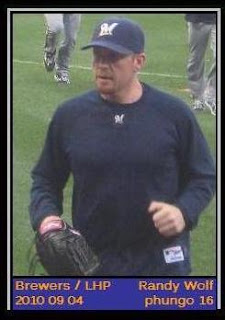 Wolf is never going to be the A starter for a team with World Series aspirations, but he is a decent lefty who can hold down that 3 or 4 spot on a good team.  Tonight he will try and hold off Albert Pujols and the rest of the Cardinals lineup in game 4 of the NLCS.  I would like to see Brewers advance in the playoff just so I can have a former Phil to root for in the Series.

The Brewers are facing another former Phils Pitcher in Kyle Lohse, but I really don't count him.  He was only here for a brief post trade deadline stint, and I think he only lasted an inning in the sole game I saw him pitch for the Phils.
Posted by deal at 7:41 PM